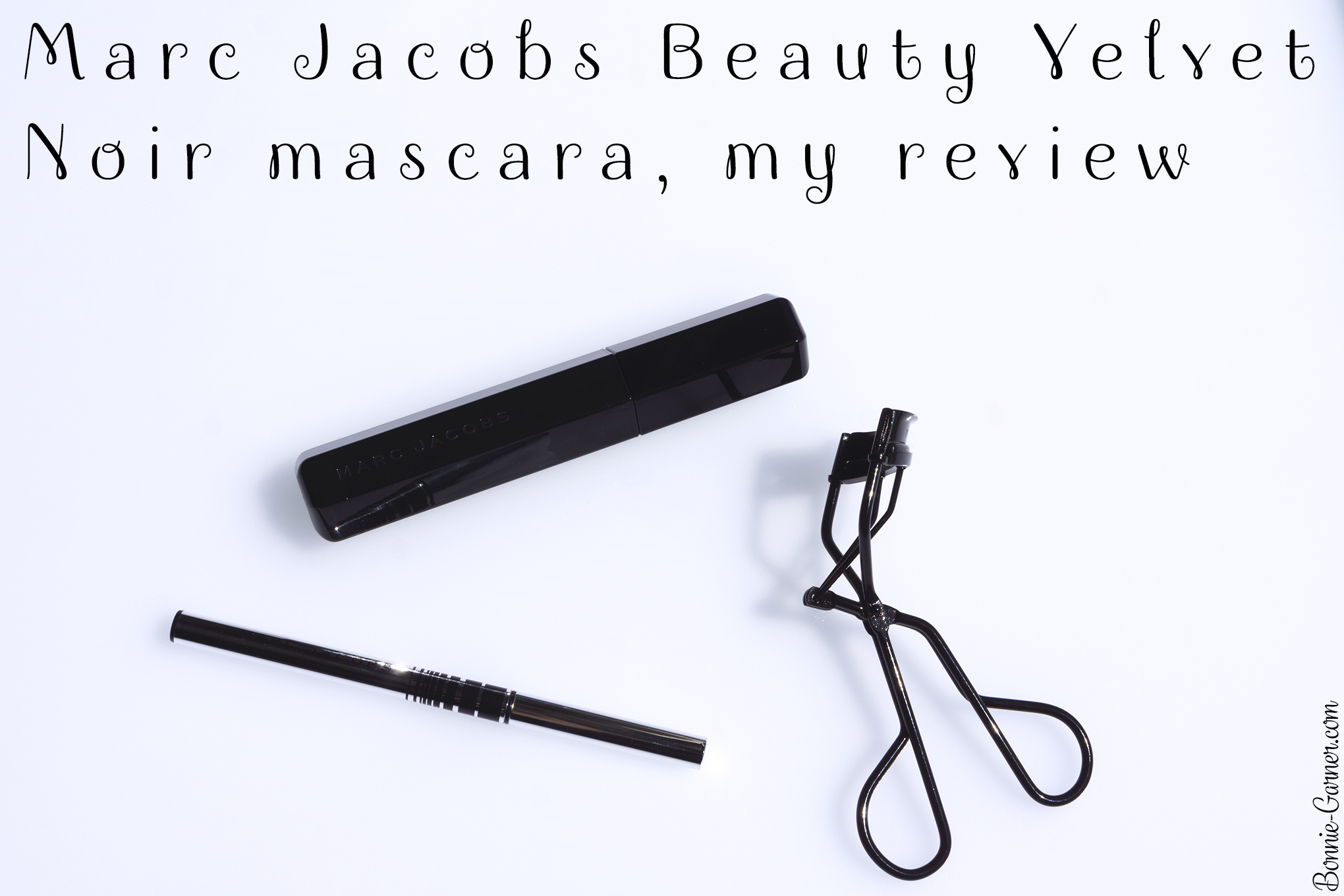 What a buzz for this Marc Jacobs Beauty Velvet Noir mascara! It’s basically everywhere at the moment, the hot topic on everyone’s lips…

I was not part of the happy few who received this mascara in its luxury box with a TV screen incorporated to show the movie they did with the lovely Winona Ryder. (If you follow some beauty YouTubers on Snapchat, I’m sure you see what I mean)
No problem, I can find this movie on YouTube! ;P

I’m not sure I really believe in the story of Marc Jacobs’ mom who glued some velvet powder on her lashes to make them bigger (well, I think she may have done that once. And she probably spent the rest of her day wondering what the heck she was thinking because those small pieces of velvet were bloody annoying when they felt down over her eyes. But the description of a conjunctivitis caused by a false good idea is not very glam, I get it, Mr Jacob!).

I resisted for a while, buying this mascara, but you all know my legendary willpower: a little discount at Sephora.fr mixed with rave reviews of this mascara all over the blogosphere (especially bloggers I trust) and upsy daisy, it melts away like snow in sunshine! bigsmile

The Marc Jacobs Beauty Velvet Noir mascara promises nothing less than a spectacular and intense black volume for your lashes. As you can imagine, with my naturally fine and light lashes, I was extremely interested! 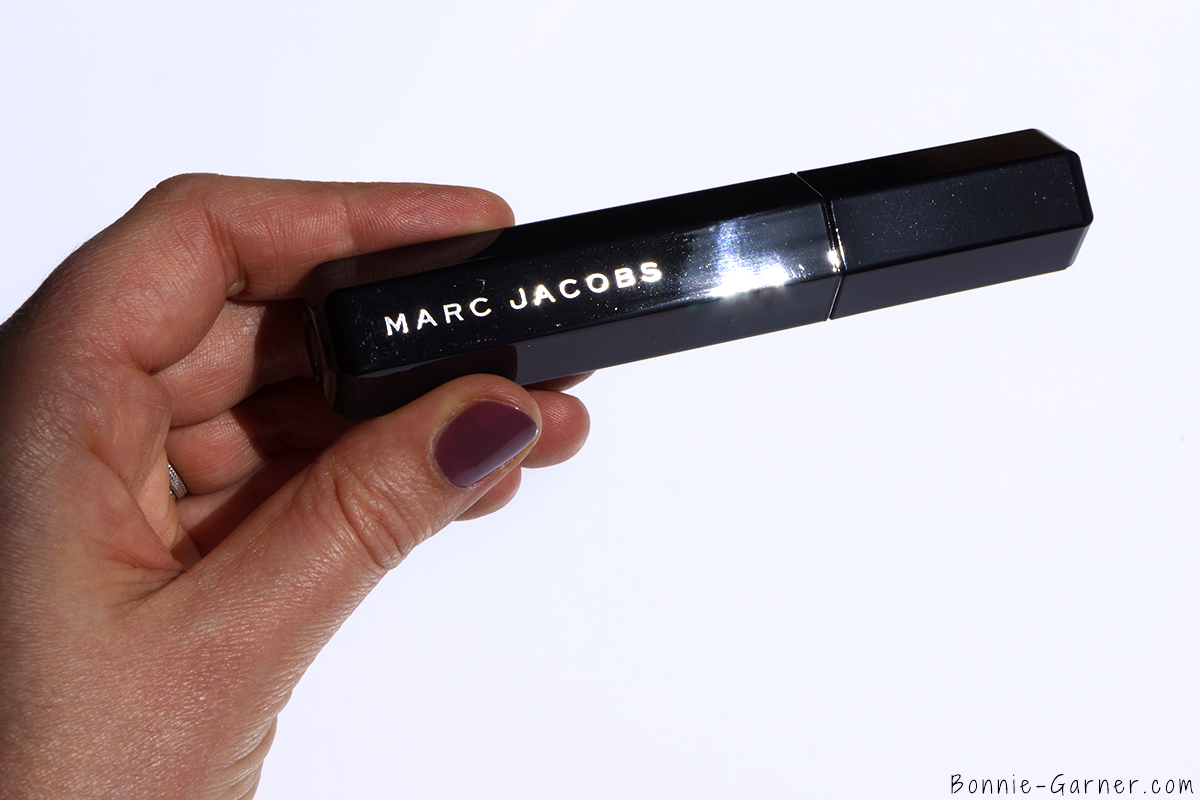 What the brand says about it:

“An ultra-volumizing mascara that delivers instant dimension for epic lashes.

Experience ultimate volume and the look of thick, false lashes with Velvet Noir Major Volume Mascara. The lash-maximizing, curvy brush places the most volume at the hard-to-reach center lash line, and the defining tip styles lashes for major drama. The super-concentrated black pigment delivers the greatest visual impact, and the Flash Volume Complex™ creates instant, smudge-proof length and volume in three strokes or less. Velvet Noir gives you the thickest lashes in one sweep. Apply Velvet Noir Major Volume Mascara on its own, or layer with O!Mega Lash Volumizing Mascara (sold separately). Pair it with Feather Noir Ultra-Skinny Lash-Discovering Mascara and Lamé Noir Ultra-Glittering Mascara (sold separately) to style your lashes for every occasion.

Velvet Noir is inspired by Marc Jacobs’s first beauty memory of his mother carefully shaving fibers from a velvet ribbon to create her own couture faux lashes.
“I have some very fond memories of watching my mother do her makeup before she’d go out on a date. I could sit there for hours and watch her as she would choose her clothes and put her makeup on. She’d take a piece of black velvet ribbon and she would scrape it with a knife so she could take the pile from the black velvet to make the lashes even thicker and clumpier.”—Marc Jacobs

So it’s pretty clear that the brand promises a lot of volume with a texturizing effect. A kind of “big lashes” effect really but without clumpiness.

As often with mascara, the innovation is in its curved volumizing brush that is supposed to cover the eyelashes and thicken them but also separate them at the same time. This is a classic brush with bristles, not a plastic one.
Also, the cream formula is supposed to provide some texture to the eyelashes to amplify their volume. 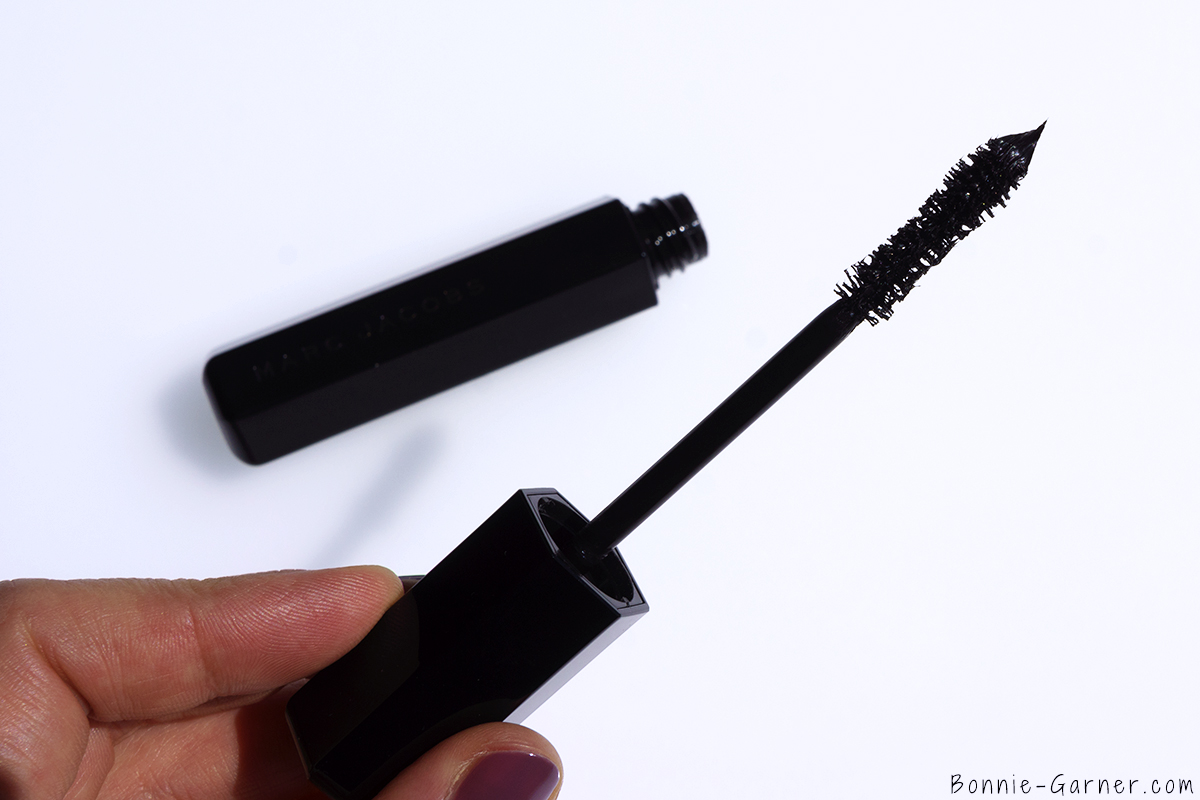 My opinion on this mascara is quite mixed:

The formula is as thick cream, not too liquid and quite “dry” so it really thickens the lashes even after just one single brush pass.

The Velvet Black mascara is not waterproof but it didn’t smudge or crumble during the day.

This is a classic brush with bristles, not a silicone one. I have no particular preference when it comes to mascara brushes, some work very well on my eyelashes, others don’t.
This one is pretty good, rather big in size but you can still apply mascara on all the lashes easily and without putting it all over your eyelid. It’s curved in the center which allows to distribute a lot of products at once for a good “thickening” effect.
But actually, that’s precisely the reason why I have a problem with this mascara: the formula being rather thick, the application is way too generous and I end up easily with super clumpy eyelashes. You must wring the brush before using it but even doing that, I often have to brush my lashes with a clean spoolie to avoid getting my eyelashes stuck together… uneasy

You understood that it’s not really its strong suit… 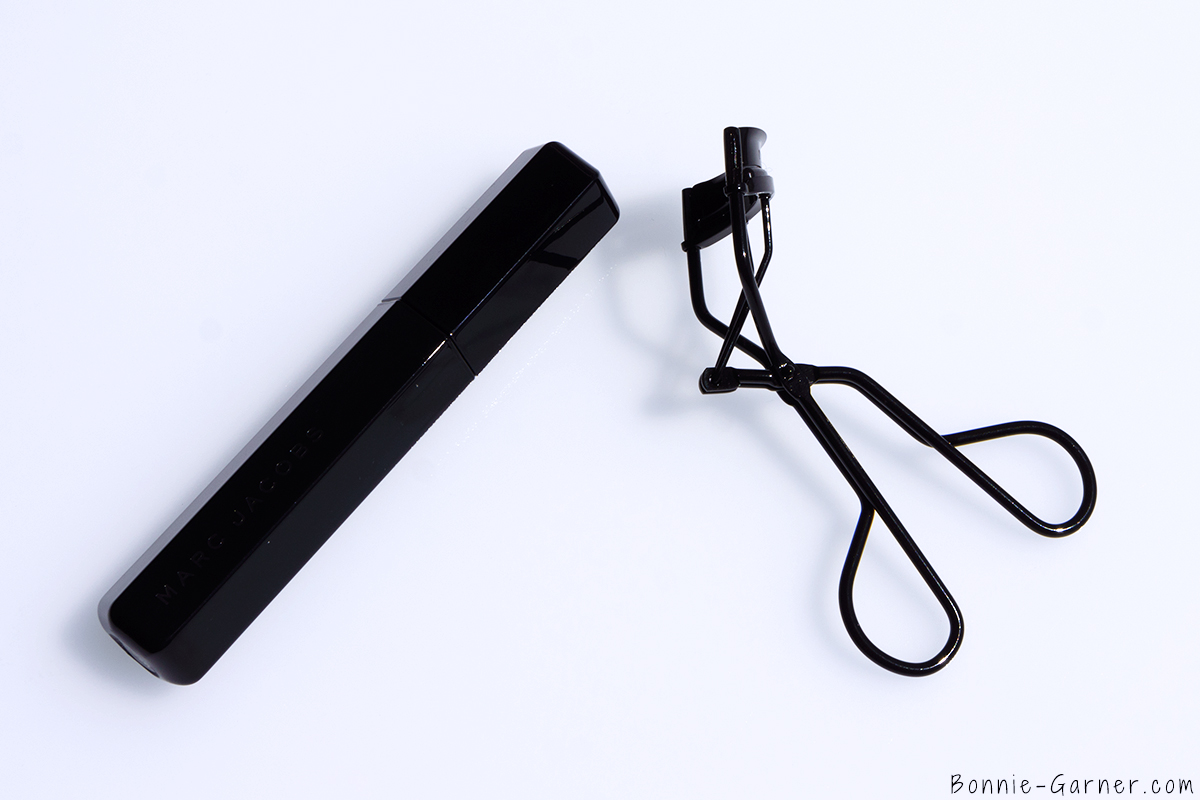 Not really but hey, it wasn’t really a claim of this mascara, so it’s not surprising. wink

Clearly, you need to use an eyelash curler before using this mascara, because it’s not supposed to curl the eyelashes.
However, and this is probably due to the fact that the formula is rather “dry”, it sets very well the curl obtained from the eyelash curler and it doesn’t move until the evening, which is quite rare for a non waterproof formula. A very good point, actually! smile

It really thickens the eyelashes. The effect is really visible and intense, which I love with my natural very fine lashes. 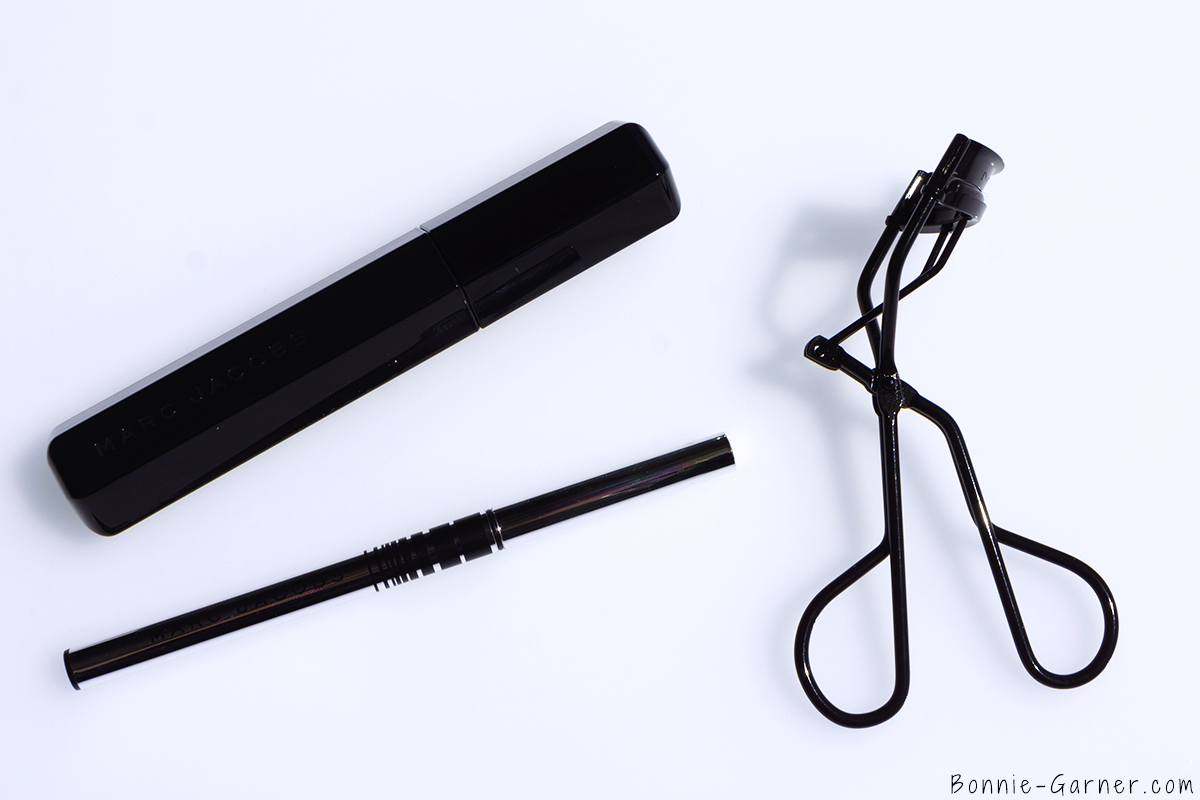 A beautiful intense matte black, very dramatic: I adore it!

For a non waterproof mascara, it lasts pretty well. It doesn’t smudge, doesn’t crumble and holds the curl very well. And all that without being a pain to remove! Well done, Velvet Noir! wink

Overall, I would say that it’s a pretty decent mascara for the price, that gives a lot of intensity to the lashes but you need to have your spoolie ready and to be prepared to brush your lashes because it will make them looking clumpy for sure… But if you like this kind of “spider lashes” effect, you’ll like this mascara! smile
It retails at $26.

And on my lashes, what does it looks like?

I used my eyelash curler before and I applied 2 coats of Velvet Noir mascara. (I’m not gonna lie, I had to brush my lashes before they dried with a spoolie because my they were clumpy after these 2 coats)

– Front view (before and after): 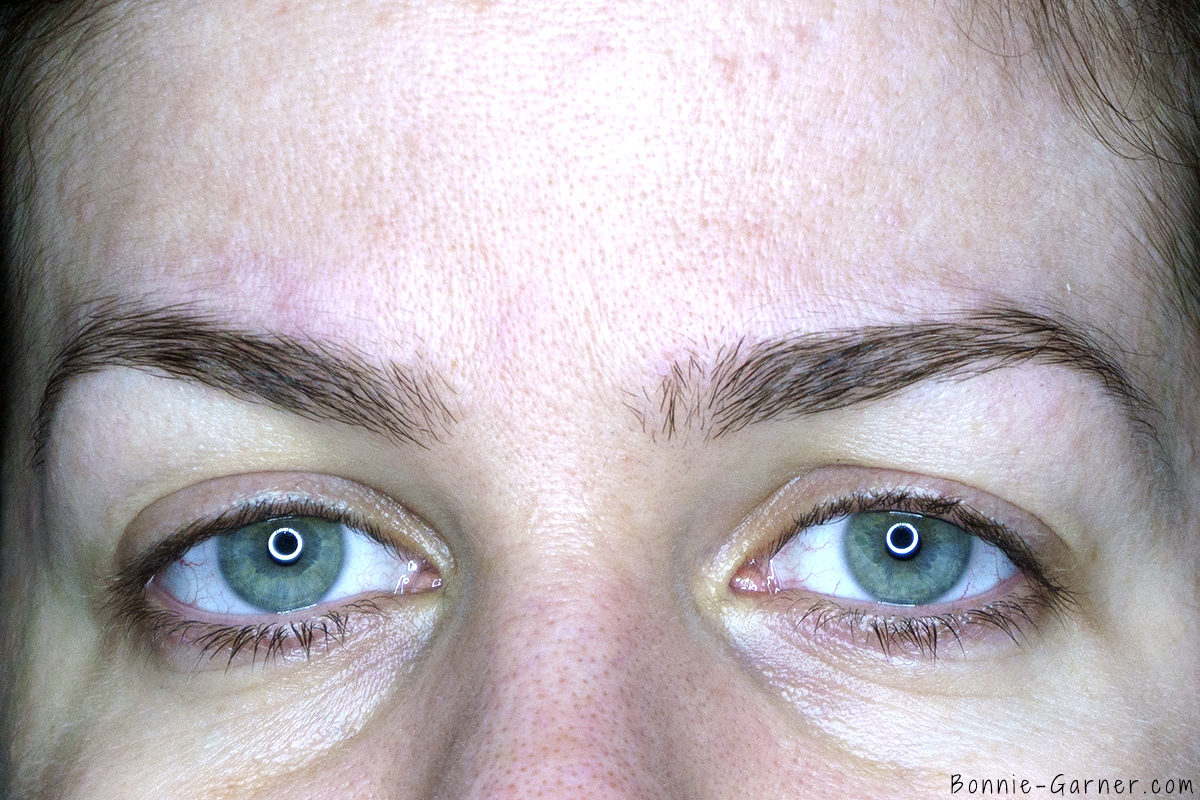 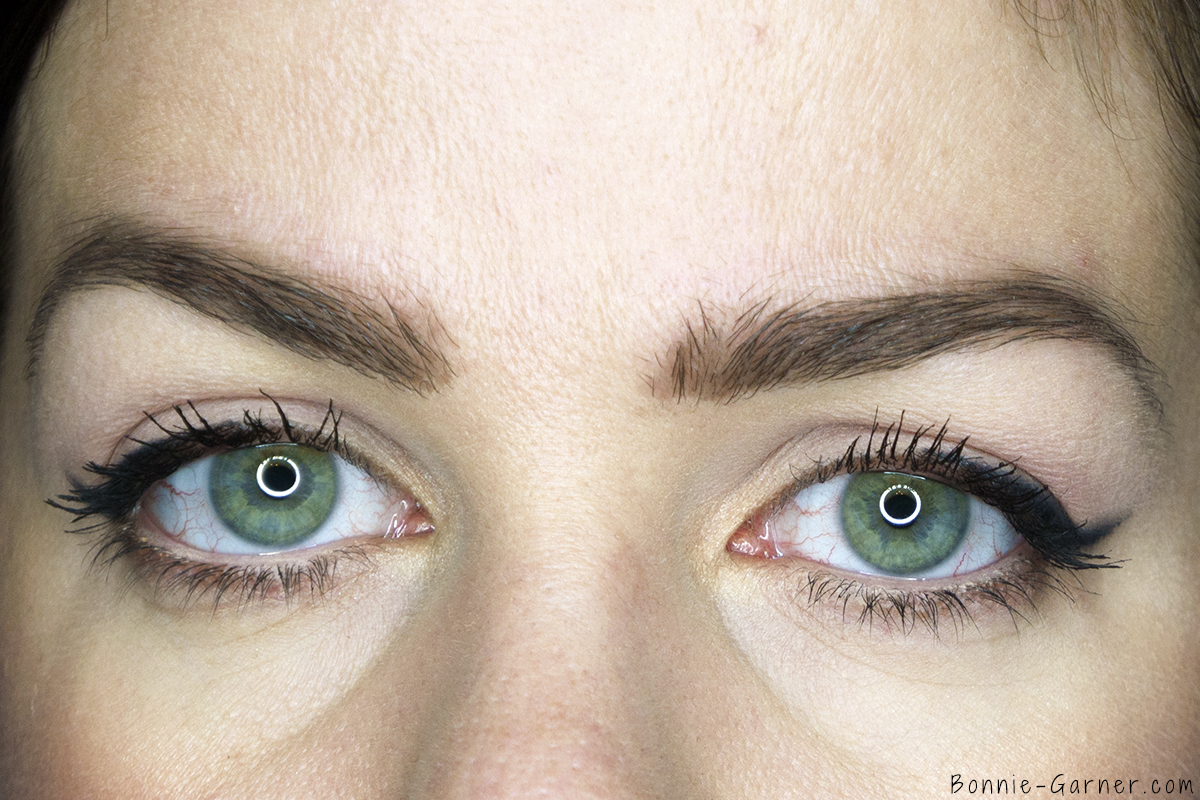 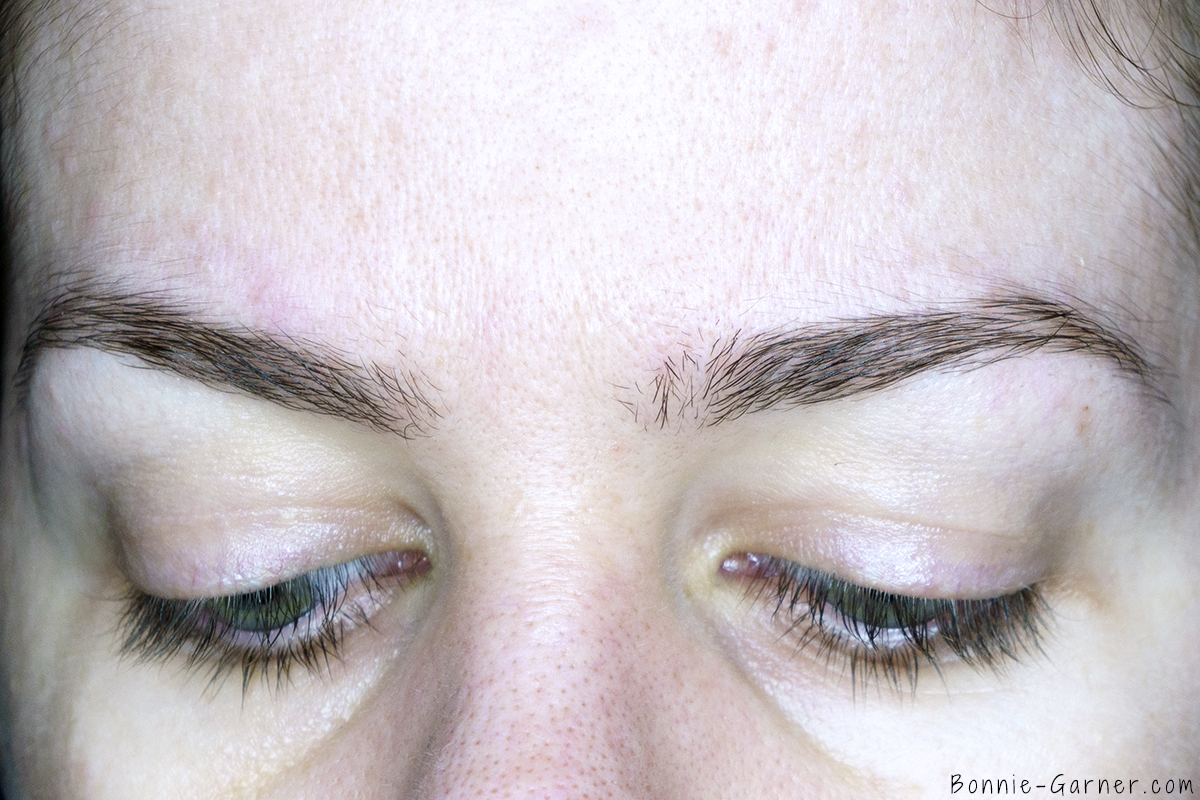 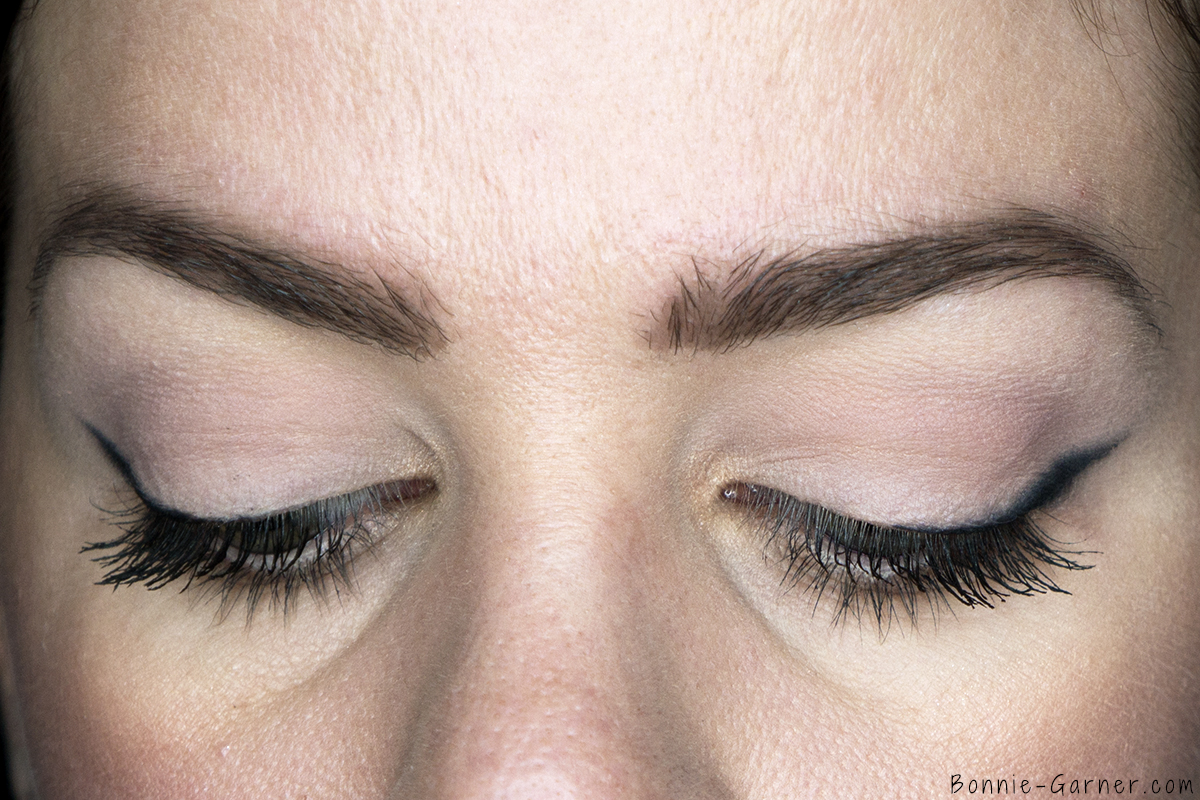 – Side view (before and after): 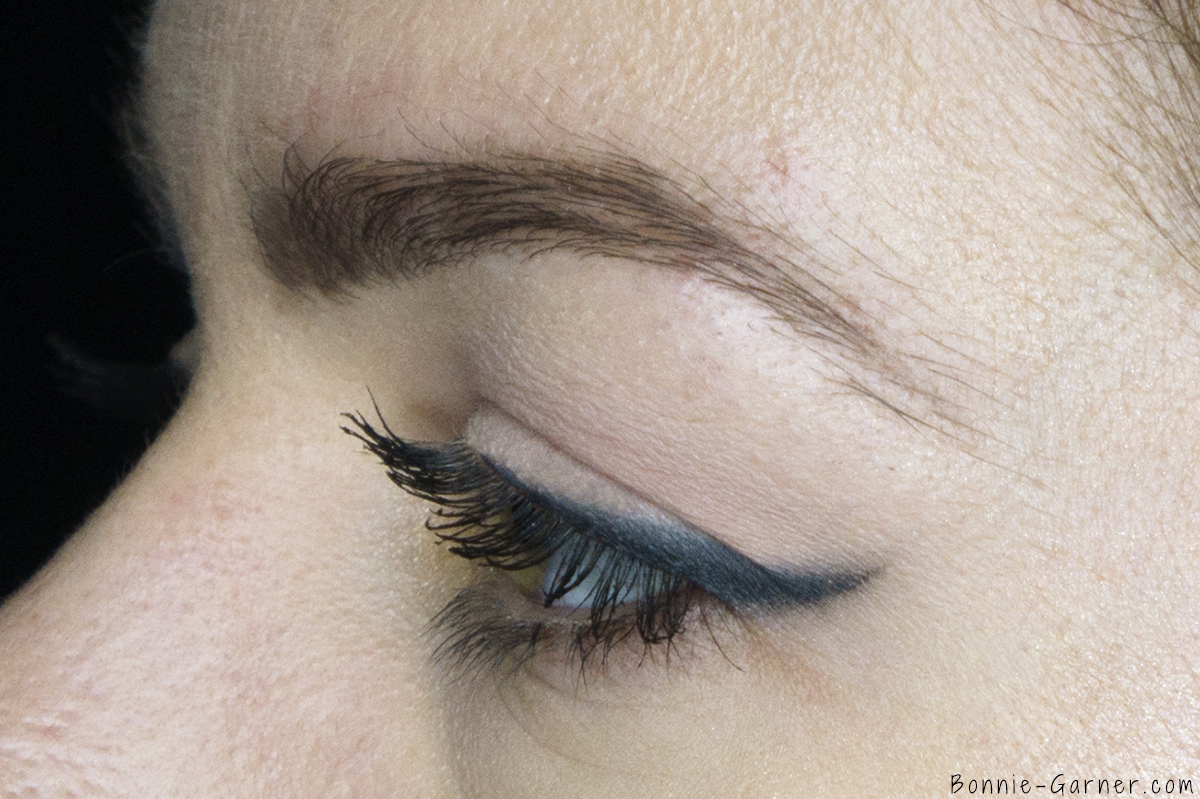 - a real volumizing effect, very thickening
- the color, very black and very matte: I love!
!
- it holds the curl very well
- long-lasting, doesn't smudge and crumble
- it's not difficult to remove

- very clumpy probably because the formula is very thick
- you need to brush the lashes to separate them, every time
- the formula is pretty "dry" once opened so it probably won't last very long (2 months?)

You understood, I have a mixed opinion about this Velvet Noir mascara:
On the one hand, I love the intense matte black and volumizing effect but on the other hand, I find that it’s a lot of work to apply  it “cleanly” to the eyelashes. Let’s say that if you have some time to brush your eylashes to keep that intense volume effect without the clumpiness, it’s worth it. But it’s not the quickest mascara to use  in the world, for sure…
And also, I’m scared that its formula won’t last very long, because it’s already quite thick when it’s brand new. A “normal” mascara doesn’t really have a very long life (maximum 3 months), so this one is likely to dry quickly. I have mine for a month now, and the texture is already dryer… uneasy

And you, did you tried this Marc Jacobs Beauty Velvet Black mascara ? Did you like it?