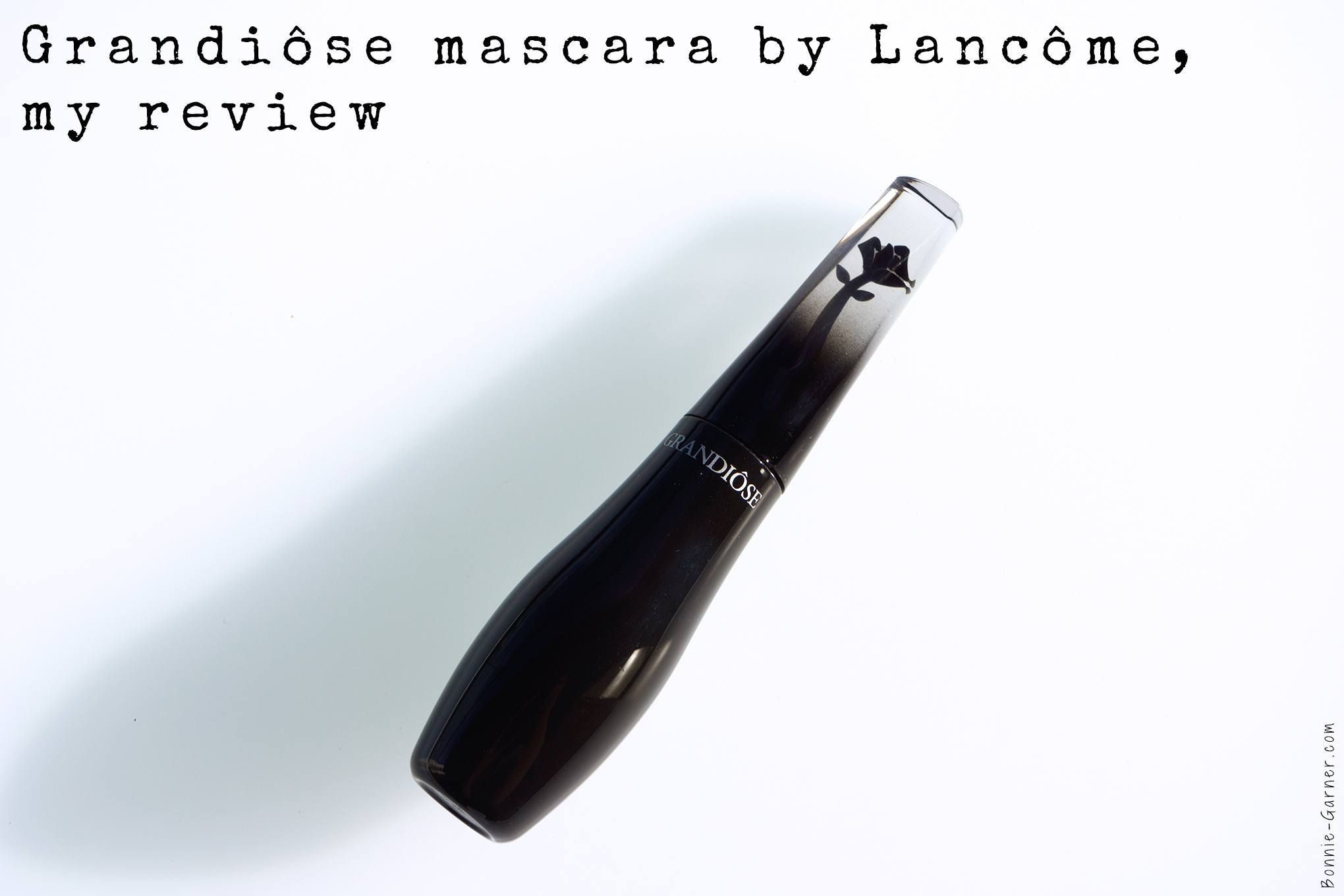 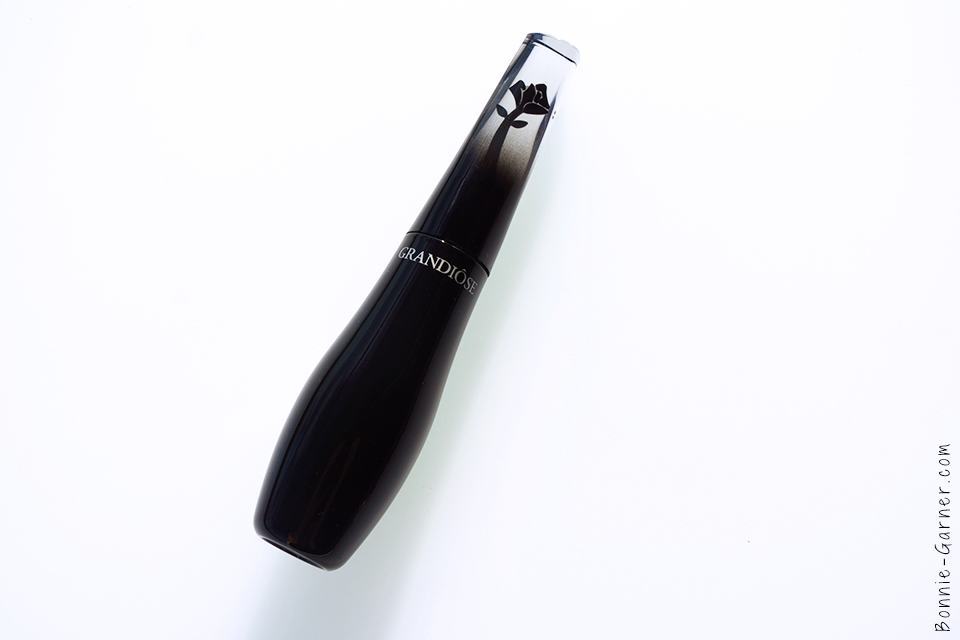 For this one, I was quite late to the party. I didn’t run to the closest Lancôme’s counter when it was released (as I usually do)(ahem). I thought that this mascara’s claims were not really for me…

I have rather long eyelashes but very fine, short and straight. What I usually look for in a mascara is a curling and volumizing effect. If the product claims to be a false eyelash effect (which does everything: lengthening, volumizing and curling), that’s fine with me too, huh, I won’t refuse a little bit of length! wink

But the Grandiôse mascara by Lancôme, it supposed to create “a spectacular wide-angle fan effect” with your lashes, so it’s supposed to elongate, separate and “open” (or curl) the eyelashes.
Of course, as it also has a intensifying effect, I thought that with 2-3 layers, I could also add volume to the lashes!
And finally, my curiosity got the better of me and since this Grandiôse mascara won a few beauty prices (Marie Claire, Elle), I thought it was probably worth a try… 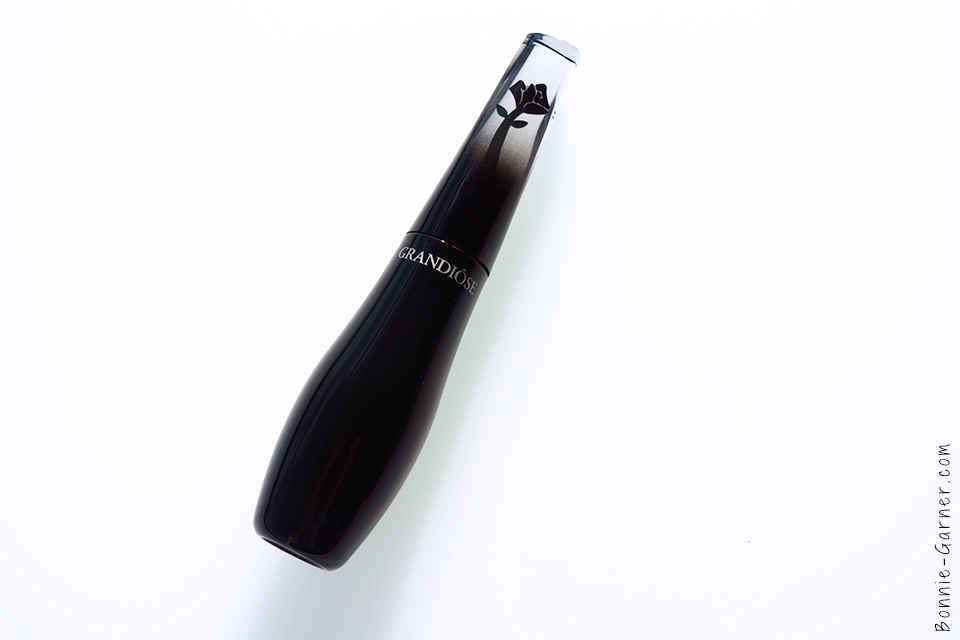 First, let’s talk about the packaging, because clearly you can’t miss it!

It is a very beautiful object. Probably the prettiest mascara ever in my bathroom. I love the detail of the 3D rose embedded in the transparent cap, it’s sublime.

But we all agree that the packaging is not really the most important part of a mascara, so let’s see the promises of this product!

“Lancôme reinvents mascara and unveils a new application technique that effortlessly creates a perfectly open, full and even lash fringe.

For the 1st time, only this patent-pending “Swan-Neck™” wand and high-precision brush can grab lashes this close to the roots to perfectly fan them out, corner to corner. Starting with the first stroke, without bending your brush or straining your wrist, the lash line is easily filled-in and lashes are coated from root to tip. Adapted to compliment every eye shape, this mascara creates a spectacular wide-angle fan effect.
An innovative formula enriched with Lancôme’s exclusive Native Rose-Cell Extract™.

So, here, the innovation is in that famous “Swan-Neck™” wand that allows to catch all the lashes one by one. 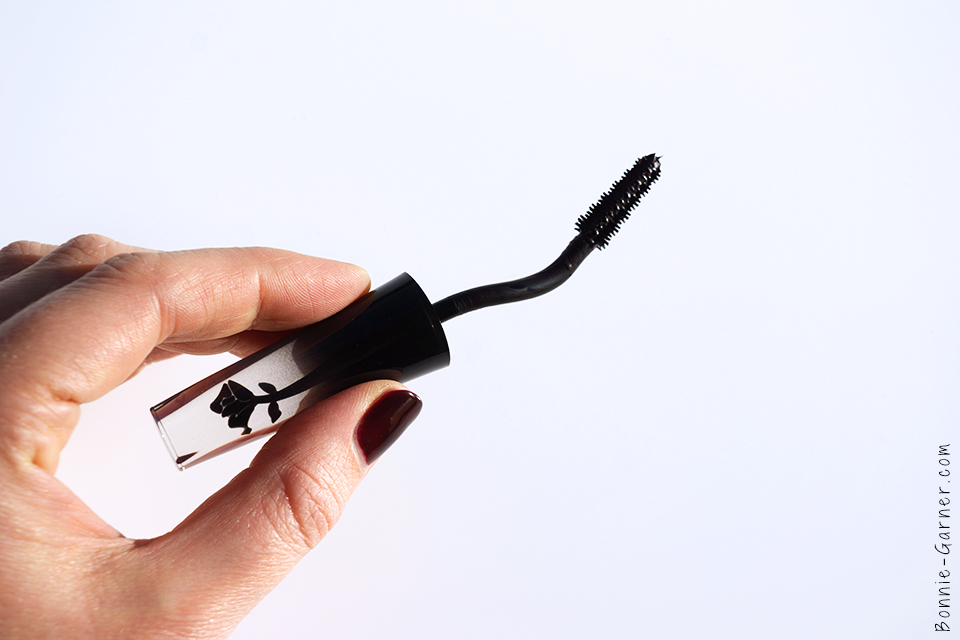 When you’re buying this mascara, there are directions for use in the box that explains the best gestures for this mascara. Nothing revolutionary, really: simply apply the product from the base of the lash with the brush and make some zigzags along the lashes. It’s a technique that I’ve been using since… oh well, since forever! wink
But I recognize that the shape of the wand makes the gesture far simpler, it can be used easily with one hand or both if you prefer (like me).

The brush is a silicon one with fairly short and stiff bristles, which makes it better to catch the eyelashes from their root.

The color is a very intense black. The formula is also enriched with rose extracts to fortify the lashes (I’m not so sure about the fortifying effect but let’s just say that it can’t hurt your eyelashes!).

Grandiôse mascara by Lancôme, my test:

To be honest, at first I really didn’t like the Grandiôse mascara.

Not really because of the wand, which rather seemed pretty good to catch all the lashes, but more because of the formula.
Indeed, the first 2 weeks, I found that the formula was really “wet” and the curl I was getting by working the product in my lashes fell almost immediately after: aaaargh!

After a few weeks, the mascara was a little thicker and dryer and I found it much easier and pleasant to use.

And what about that famous ‘spectacular wide-angle fan effect’?

Well, actually, the eyelashes are very well separated, elongated and curled. But big negative point, this curl still doesn’t last all day… Of course, I didn’t really expect a miracle as it’s not a waterproof formula (which generally holds the curl much better, the waterproof formulas “freezes” better the movement from the brush on the eyelashes)(something to do with a dryer formula, I believe) but hey, with all the hype surrounding this “wide-angle fan effect”, I was expecting a little more than that… uneasy

Another negative point, the volumizing effect is not very convincing. Even after putting 4 layers of product. The eyelashes just look clumpy.
Yes, I know, it was not really the first promise of this mascara, but hey, “grandiose” lashes are thickened eyelashes, right? No? OK. sad

However, the lasting power is very good and it doesn’t smudge at all. Very good point!
And he removes easily, perfect.

- the packaging is very beautiful, almost ostentatious...
- the wand really makes the product application easier
- the eyelashes are well separated
- the color: a very intense black
- the lasting power is very good, it doesn't smudge (and it's not even a waterproof mascara!)

- the formula is very "wet" at the beginning (and I really don't like that)
- no volume effect on my lashes
- the curl doesn't last on my lashes, such a shame
- the price: it's not cheap (at all)

It’s not a bad mascara, far from it, but clearly it’s not enough for me (I love my volume effect), and the fact that the curl doesn’t hold well is also a no-no.
I won’t repurchase it.

I have to add that I used an eyelash curler before my pictures (if my eyelashes are too straight, it’s almost impossible to see them, and anyway, I never apply mascara without curling my lashes before).

Before (but after using my eyelash curler): 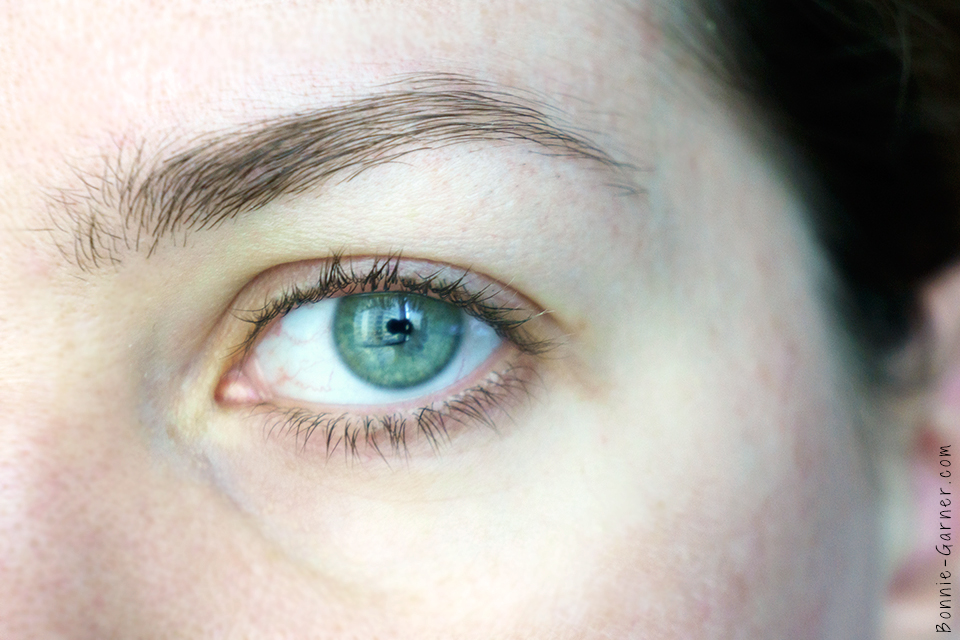 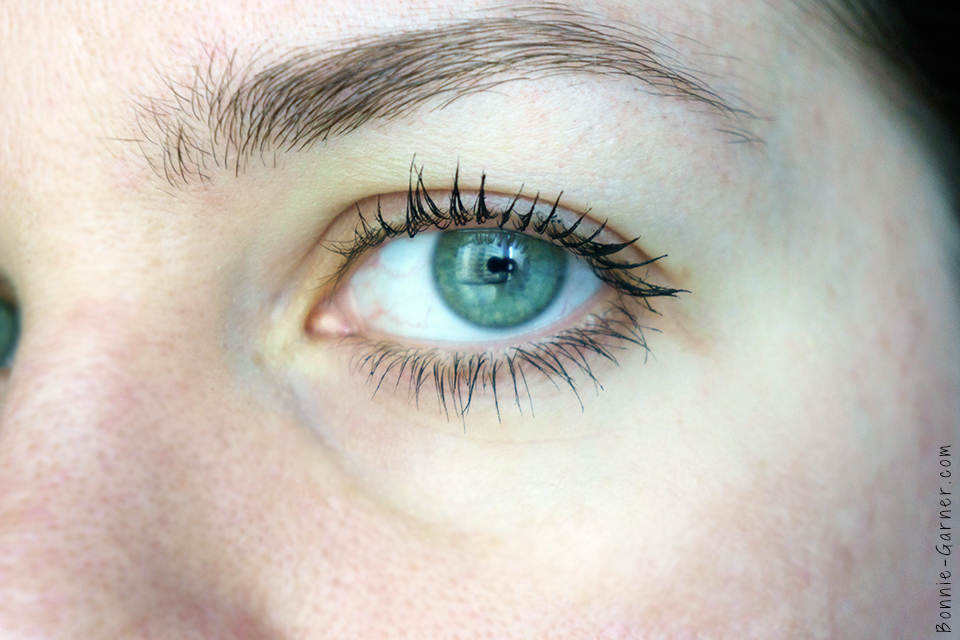 It’s not bad but it’s not really “grandiose” as a result, is it? ;P

One can find the grandiose Lancôme mascara on the brand’s website at a price of 32 euros.

So, yep, back to my Volume de CHANEL Waterproof or my False Lash effect by Max Factor Waterproof until something better arrives…

The Grandiôse mascara by Lancôme is available on Lancôme website or Sephora for $32.

And you, have you tried this Grandiôse mascara by Lancôme ? What are your thoughts?