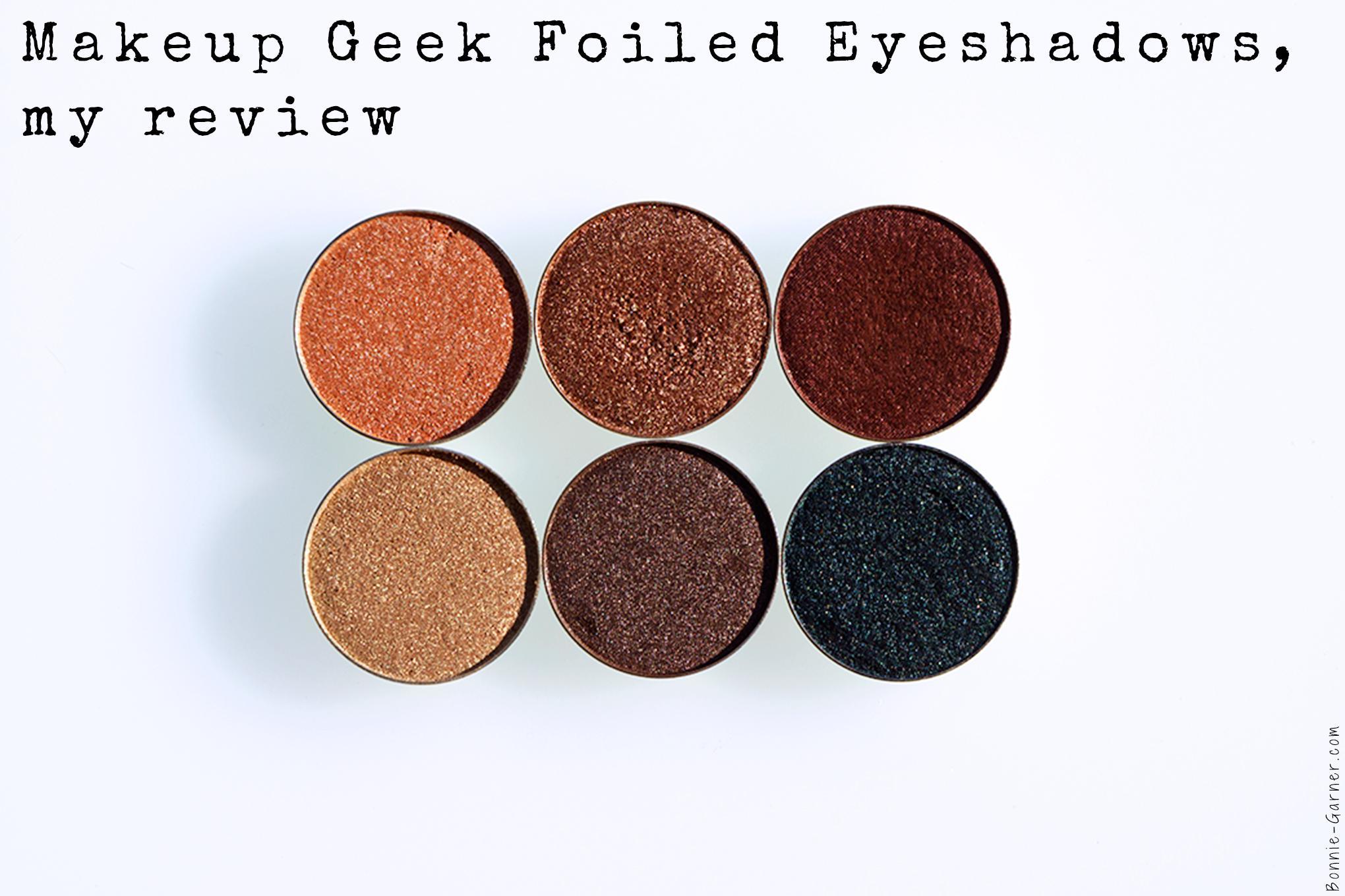 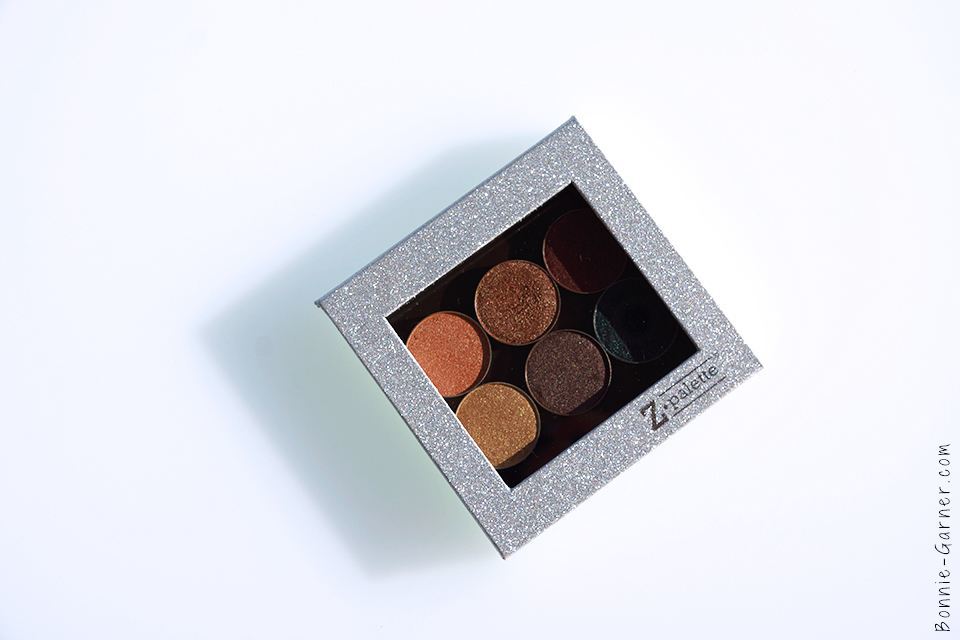 Yes, I know, it’s been weeks since I promised I’d tell you more about Makeup Geek Foiled eyeshadows!

I had a total crush on these eyeshadows: that is why this review has taken some time to be written. In fact, I first bought two Foiled eyeshadows and I became so obsessed that I  re-order immediately four more!

Until now I didn’t know much about the brand Makeup Geek . Well, of course I knew Marlena, the CEO, with her YouTube channel, where she does makeup tutorials.
I must also admit that although I find her super nice and cute, I’m not a big fan of the makeup looks she does in her channel. It’s often very colorful, very sophisticated, a little too much for me. It’s not really my style. But that’s just me of course. This is also probably why I wasn’t really interested in her products at first.

But Makeup Geek is really a great brand with a cool history of an American self-made woman inside! wink

Marlena began with a blog full of makeup tutorials and began gradually selling products on this site. Soon after, she wanted to start her own cosmetic company.
So she dropped her piano teaching job and she started producing makeup. She wanted her products to be made in USA. Her goal was to produce affordable products without compromising on quality. She clearly succeeded!
She has managed to challenged classic makeup brands such as MAC, for example. Same quality, if not better, but for very affordable prices!

The brand’s development has been especially on word of mouth but also a lot through social media. As a blogger and a YouTuber, Marlena understood the importance of these new platforms and made numerous partnerships with other YouTubers.

Makeup Geek has become very popular these last years (even if the brand only exists since 2011) and it’s one of the most dynamic makeup brands in the US market.

Marlena is still a respected figure on YouTube and she’s someone who seems really honest, and the cherry on top, totally adorable. So other YouTubers (and not only from the US) just swear by her and her products. And it’s because I saw others YouTubers doing reviews or using her Makeup Geek products that I wanted to try them myself.

The Foiled eyeshadows were released in late November in the US and during the weeks following the launch, there has been a lot of positive reviews on these products. No, not just positive, they were ecstatic!

And then I came across this video, which is not a review but a makeup tutorial with the Foiled eyeshadows:

I was sold. I totally needed to try them! (And also the ColourPop eyeshadow used in the video for that matter) (I’ll talk about that too, don’t worry… wink )

So I basically discovered the brand Makeup Geek through these new Foiled eyeshadows but I was so hooked that I also wanted to try the classic range of eyeshadows. And OMG, what a great idea! It’s been such a long time since I didn’t have such a crush on a makeup brand.
I would do a complete and different post about my Makeup Geek collection once I’ve really had the chance to try them properly but I can already tell you that apart from a select (and small) few, it’s true love!

All in good time though… So today I wanted to introduce you to the now famous Makeup Geek foiled eyeshadows. 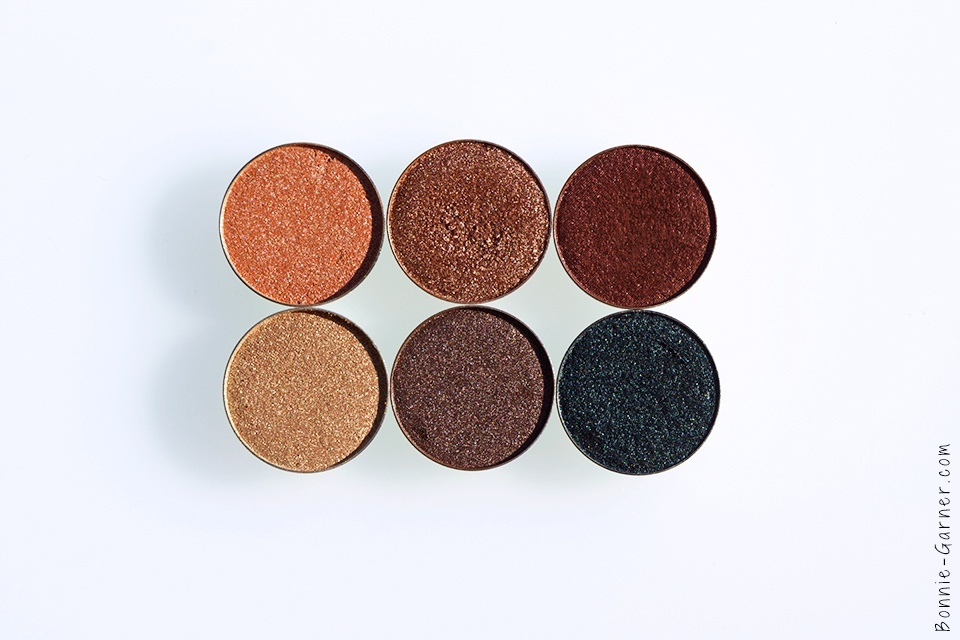 Metallic eyeshadows are all the rage at the moment! But these are certainly the greatest of all those I’ve tried.

Let’s talk about the texture of these eyeshadows because it’s quite special: it’s not really a powder but it’s not a cream. It’s in between. When you touch it, it seems soft and bouncy, which is funny!

The formula is as always with Makeup Geek, totally great, and this without using any talc or parabens whatsoever. The products are also cruelty-free (always a bonus).

The color range is rather limited at the moment. There are 10 references and half of them are bold true colors, not really neutral. For me, it’s the only disadvantage with this range. I wanted easy colors to wear (my beloved nude colors). It’s quite a ‘wow” effect with an incredible luminosity and paired with an intense colour, the result is a bit ‘too much’ for me. wink
But this choice of colors is not really surprising. Marlena is famous for her love of real colors!

I selected colors which are the more neutral to me (well except the green Houdini, I couldn’t resist that one). Ideally, I would have loved the same color range as Nars Dual-Intensity eyeshadows but with the texture and the brilliant formula of the Foiled eyeshadows. It would have been so great! But there is hope, other references of Foiled eyeshadows should arrive in April, I can’t wait of course!

The Foiled eyeshadows also have an impressive coverage. With the appropriate application method, the opacity is pretty insane.
They can be applied with your finger tips for maximum intensity, but it also works wonders with a brush, especially a synthetic one (not too soft though) that really allows you to ‘catch’ the pigments. A perfect brush to use with this kind of texture: the Sephora brush No. 28.

The finish of these eyeshadows is extremely shiny, it is the most metallic effect I have ever seen. I find it quite difficult to use these to make a complete make-up look. I prefer to use 1 or 2 max to pair with a more natural and classic makeup. It really adds a little something that makes the difference!
I love to apply 1 or 2 Foiled on the top of my the eyelid or along the lash line (upper or lower).

The staying power is pretty good, but I think you need to apply a base underneath just to be safe, especially if you have very oily eyelids, like me. With my trusty base Nars, it lasts me more than 10 hours.
However, be careful not to apply too much product on the eyelid, because of their cream-powder texture, these eyeshadows tend to move throughout the day. Anyway, with their pigmentation, you don’t really need to put a lot of product. smile

The price of these eyeshadows is very affordable, as always with Makeup Geek. The Foiled eyeshadows are sold in pan format, $10 each. They can be organized in a Z-Palette (a magnetized empty pallet) that you can also buy on the Makeup Geek site.

The Foiled are sold only on makeupgeek.com, there are no “physical” stores for now. But they deliver worldwide for a reasonable shipping price and it only takes a few weeks (2-3 weeks maximum). 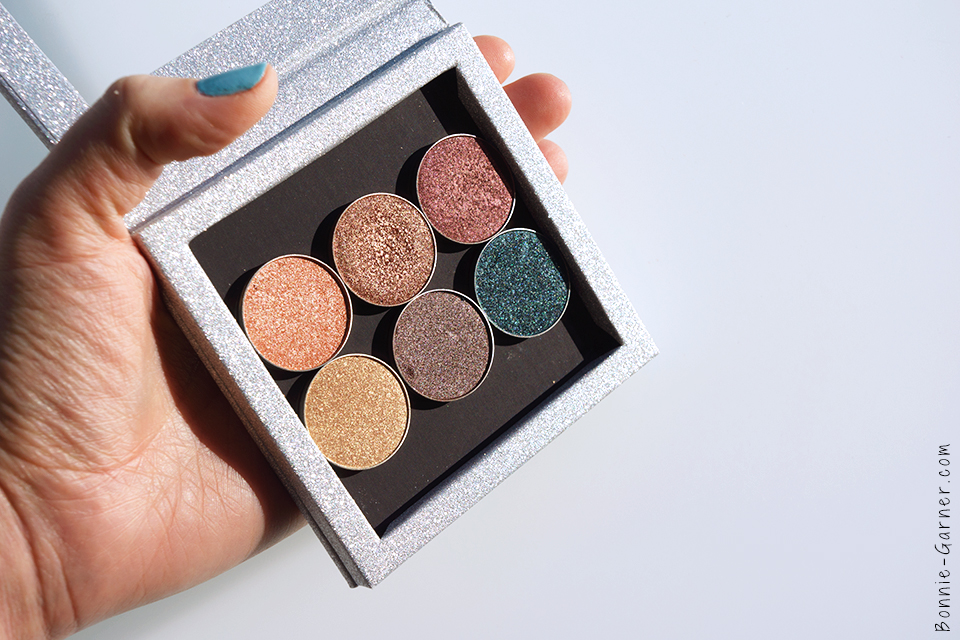 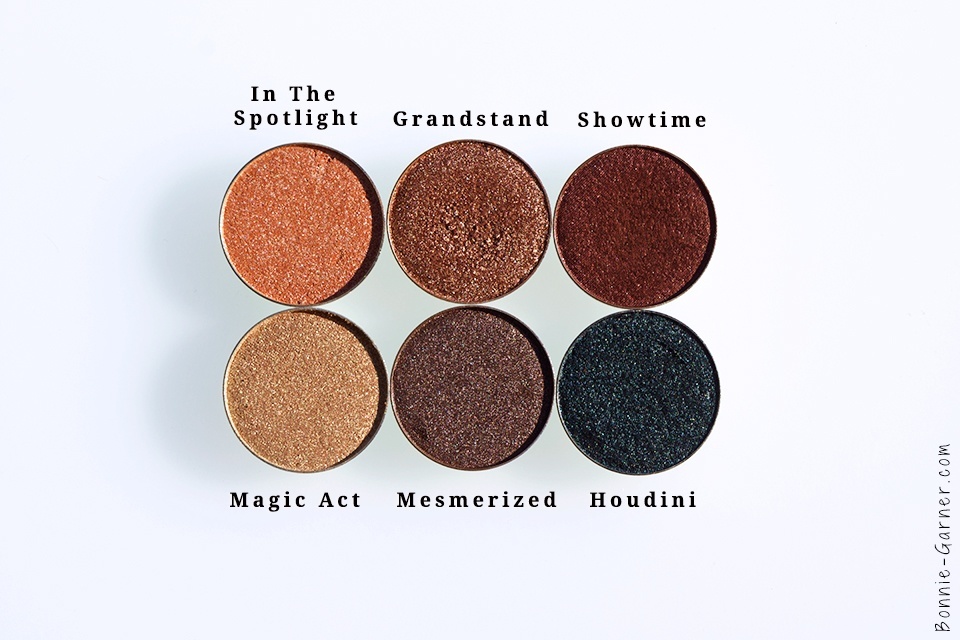 I prefer using these eyeshadows along with a more classic make-up, with some matte usually, to really let them shine.

I have therefore applied them, either on the entire eyelid, or in point of light (the curved eyelid or inner corner), or flush on the eyelash, like a metallic liner.

In The Spotlight: this is a very luminous peachy pink. It seems very orange in the pan but it is more pinkish placed on the eyelid. I confess I didn’t expect it to be as peachy, I expected it to be pinker. So, I think it will be even prettier when I have a little tan. At the moment, it appears a little too orange on my pale skin tone. But if you like this kind of peachy pink, it is absolutely sublime!

Grandstand: it’s a very light brown copper, quite rosegold. It’s very pretty set on a darker brown eyeshadow. It’s actually how I prefer to use it. Like In The Spotlight, it will certainly suit me better this summer because it has a lot of warm undertones.

Showtime: this eyeshadow is a true burgundy, quite brown. It’s the only one that is not really metallic, I was a little bit disappointed. It is very iridescent but not quite as “liquid metal” than the other Foiled eyeshadows. That being said, it’s still a great shade!

Magic Act: it is a true gold, and absolutely sublime. It is great to brighten a very neutral makeup. It is perfect used as a highlighter on the inner corner or on the eyelid. I absolutely adore this shade.

Mesmerized: I wouldn’t have thought I’d love this shade as much when I ordered it, but now, I even think it’s my favorite. This is a pretty cool taupe brown but it also has light mauvy reflects. A true multi-colored! It is very wearable during the day on the entire eyelid. In short, Mesmerized is just an amazing and versatile color!

Houdini: I ordered  Houdini out of curiosity. I found the color gorgeous: a bold deep and dark teal green with multi-reflects, totally metallic. But I was scared that this eyeshadow wouldn’t be the most wearable of all those I own. I have to confess that for now, I haven’t dare use this shade other than as a liner or in the outer corner but never as a deep Arabian like smoky eyes paired with black for example… I need to wait for a special occasion! (which will probably happen, I live in Dubai, after all! wink )

- ultra metallic effect, these shadows look like jewels on your eyelids
- the pigmentation is amazing
- the coverage is great, especially if you're applying them with your finger tips
- they are easy to use, no need to wet them
- good lasting power even on my oily eyelids (even more so with a base underneath)
- the value for money is excellent

- there is a lack of more neutral colors (but Makeup Geek is supposed to release more shades very soonwink )
- they must be combined with other matte shadows, it's difficult to do an entire makeup look with only Foiled ( it would be a bit "too much" IMHO)
- the availability (only online)(but they deliver worldwide)

Finally, here are the swatches: 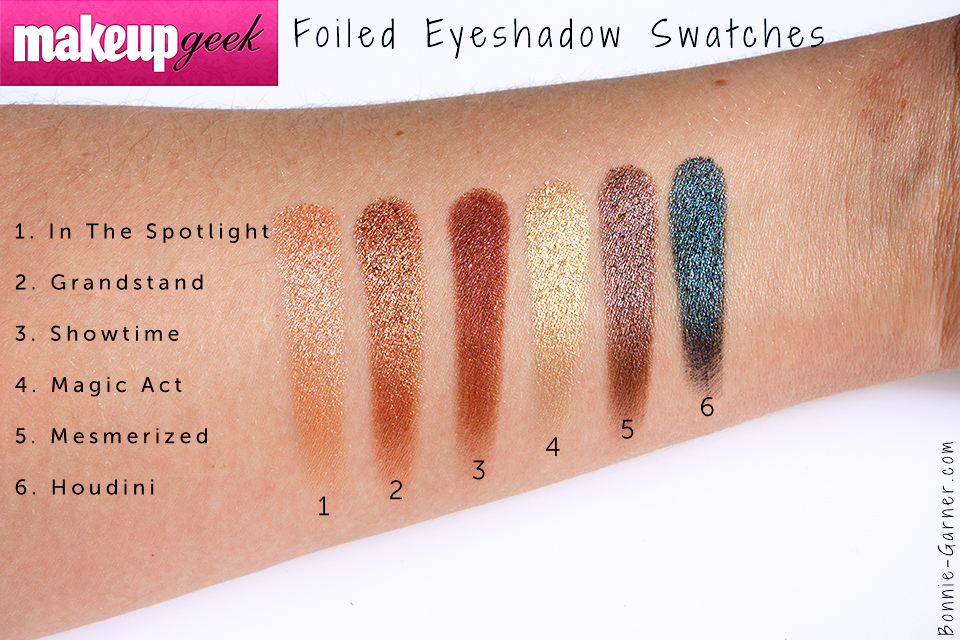 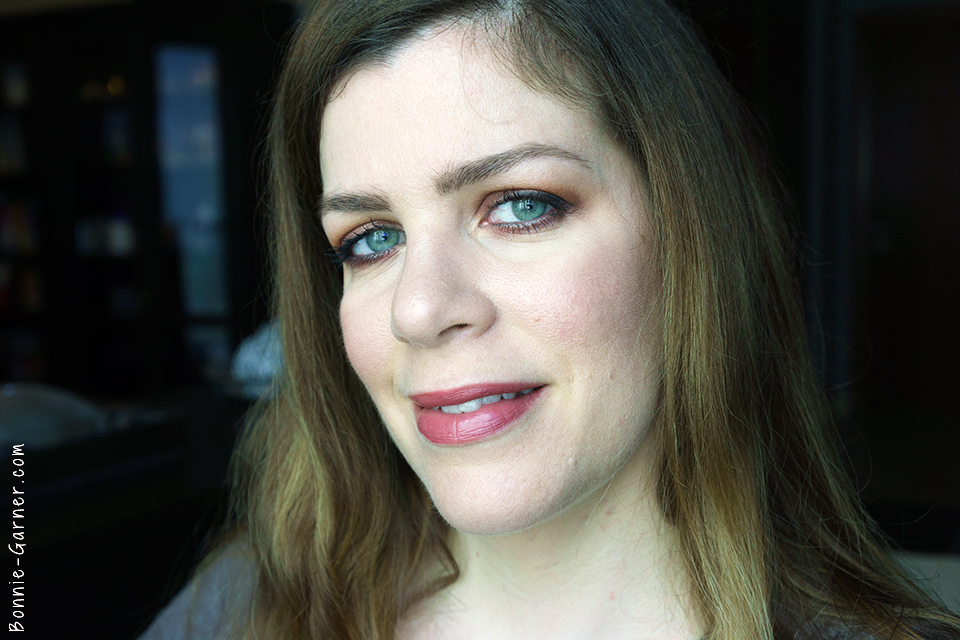 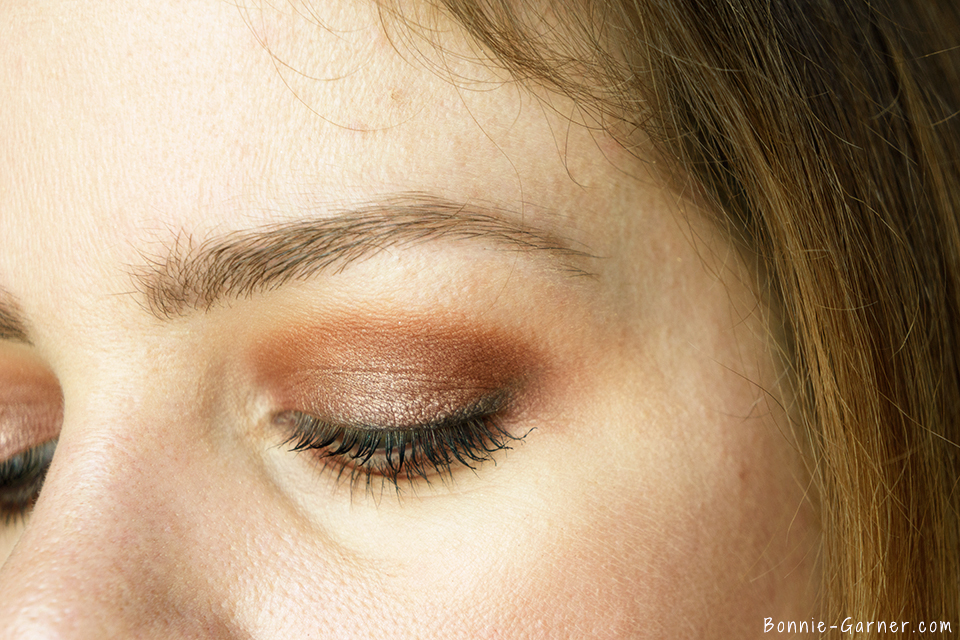 Here’s my first look with an eyeshadow by ColourPop, Mittens and other eyeshadows by Makeup Geek: the Foiled Grandstand (in the middle of my eyelid) and Showtime (along the lower lash line). I also used some classical eyeshadows by Makeup Geek: Vanilla Bean all over the lid, Cocoa Bear in the crease and Shimma Shimma in the inner corner to catch the light.
The liner here is MAC Technakohl in the Broque shade and I used the Grandiôse mascara by Lancôme. On the lips, I’m wearing a lipstick by Too Faced, La Crème Pink Chocolate. 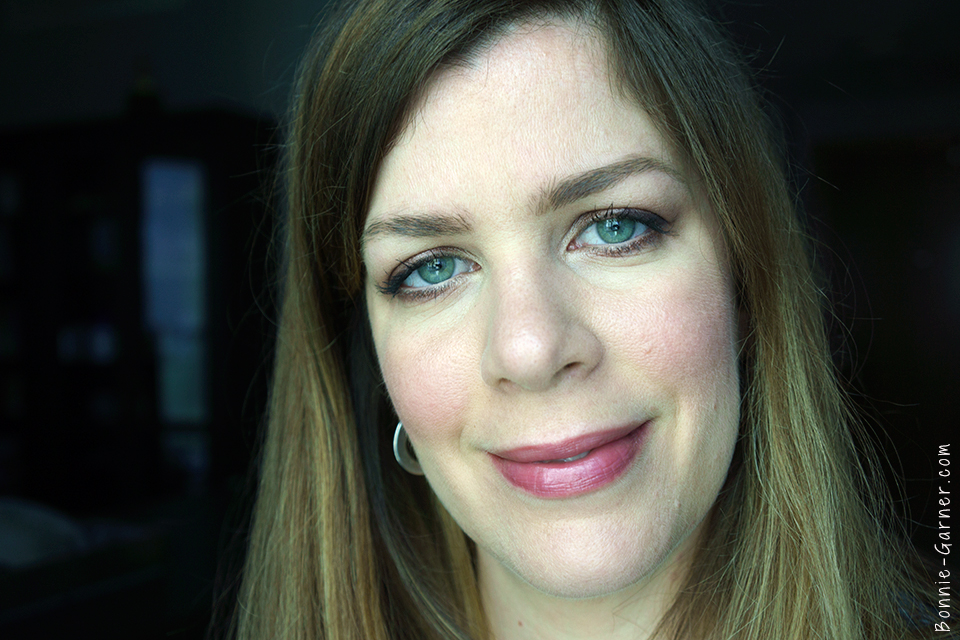 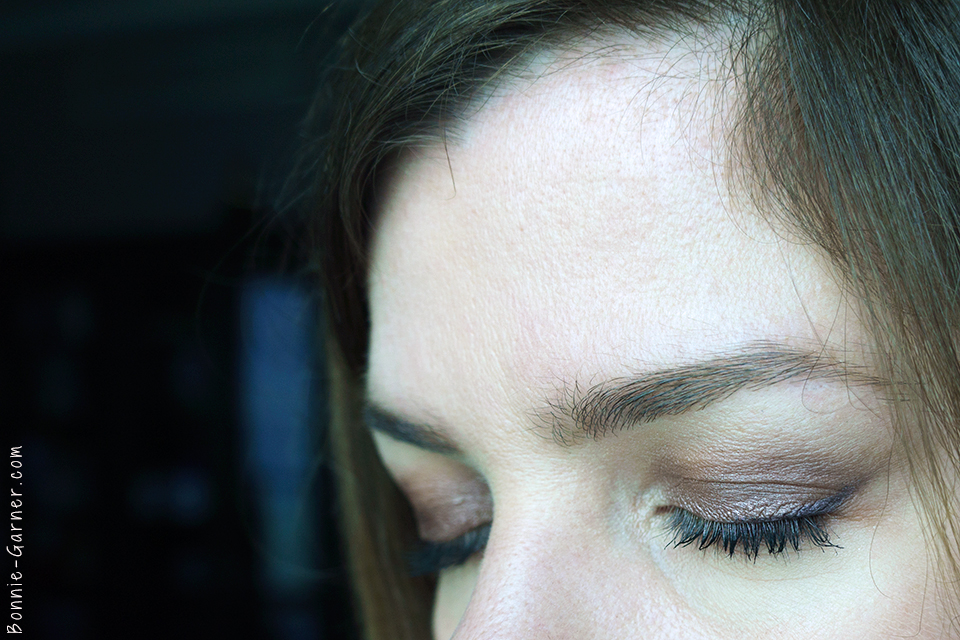 This second look is mainly focused on the Foiled eyeshadow Mesmerized. I applied it to the entire eyelid. I paired it with some classic Makeup Geek eyeshadows: Vanilla Bean (all over), Barcelona Beach (in the crease) and Shimma Shimma (inner corner).
The liner here is the Urban Decay 24/7 Glide-On in the shade Riot and my mascara is also Grandiôse by Lancôme. On the lips, it’s MAC Plumful (which is probably my favorite MAC lipstick MAC at the moment).

The Foiled eyeshadows by Makeup Geek are available on makeupgeek.com for $9.99 each.

Have you tried the Makeup Geek Foiled eyeshadows? You haven’t? What are you waiting for? ;P