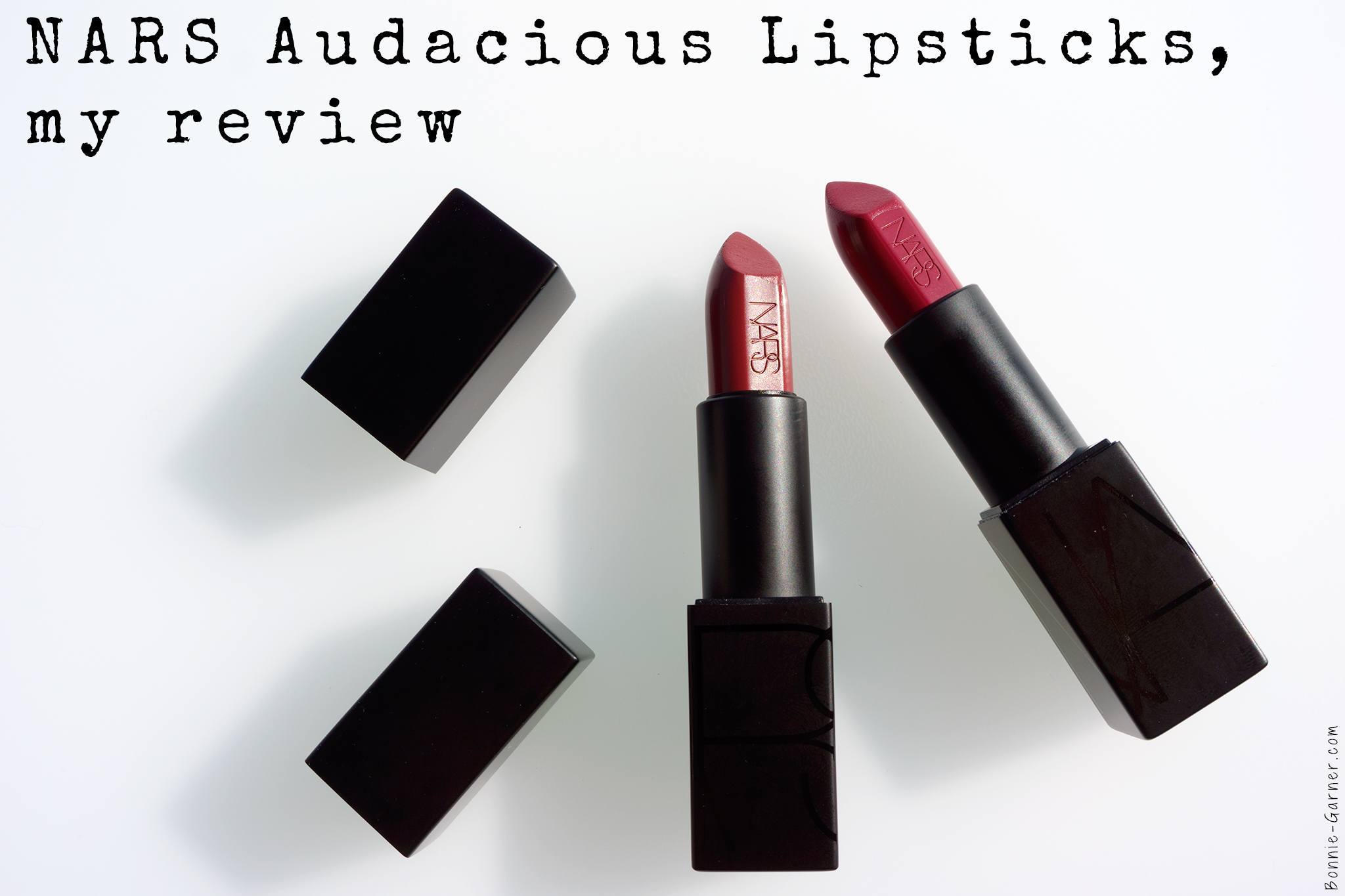 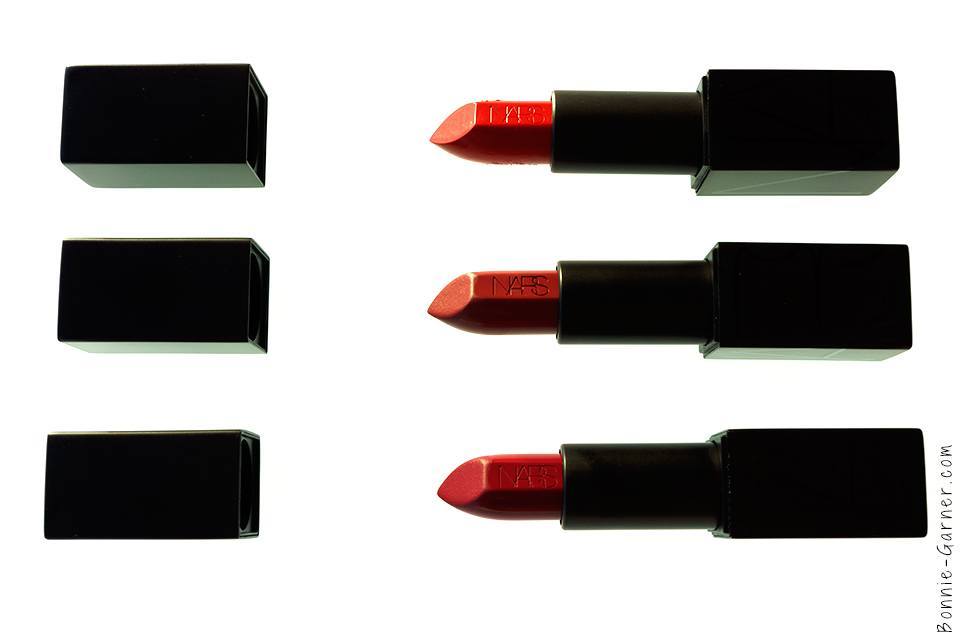 My dear lipstick-addict friends, I think we have the second best lipstick launch of 2014! I name the new range of NARS lipsticks: the NARS Audacious Lipsticks!

Yes, because for me, the other best lipstick launch this year, it’s of course the beautiful Pure Color Envy by Estée Lauder, which I had already talked about here.

To tell you that I was excited and impatient about this NARS launch would be far from the truth. When the NARS counter opened here in Dubai at Sephora, I had of course a list of products to buy as long as my arm but the Audacious Lipsticks were really on top of it!
So when I saw that they were available, I literally cleared the counter. Well, I bought 3 of them. Which is not bad! 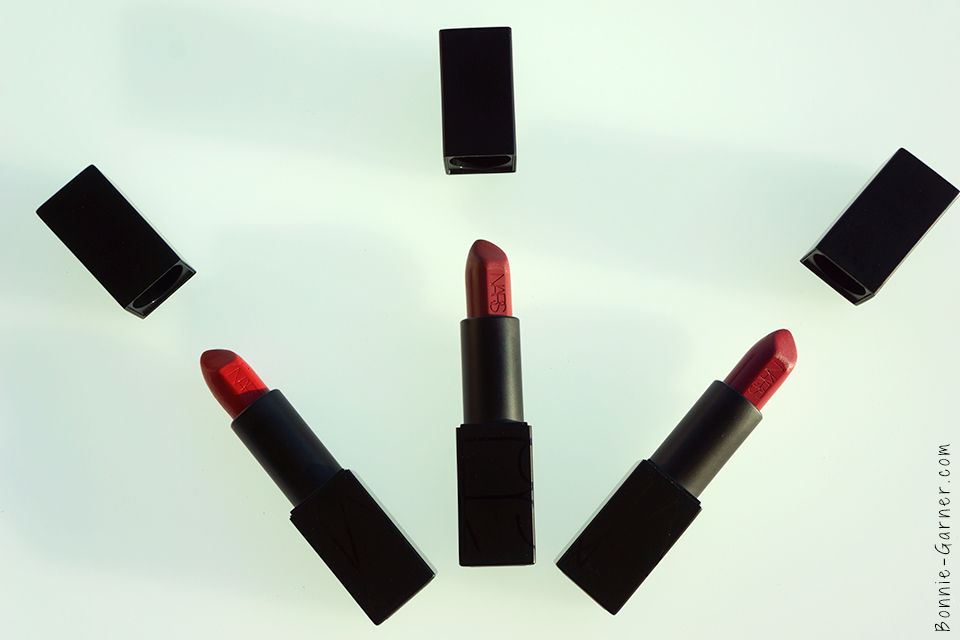 20 years ago, François Nars, famous makeup artist, launched its first makeup line with 12 lipsticks. He choose to begin with lipsticks because: “I love lipstick. It’s the one makeup item — the one accessory really — that women all over the world must have, no matter what. I launched NARS with 12 shades of lipsticks and many, many launches later, I’m still most proud of our lipsticks.
It seemed fitting to celebrate our 20th Anniversary with a new lip collection.” (François Nars)

Fitting it is indeed, but this time, it’s not 12, but 40 shades that have been launched. 40 colours, all more vibrant than the other. The dream!

This range is called Audacious Lipstick and really, they are quite audacious!
Indeed, the Nars brand has always been synonymous with bright colors, intense pigments and these lipsticks are no exception to the rule. Of course, there are some Nudes but none of them are sheer. These lipsticks have a semi-matte finish and have an absolutely amazing coverage. One stroke on the lips and they are intensely colored. So if you are a shy person with lipstick, I’m not sure that this range is for you! (that been said, trying something new is not necessary a bad thing… isn’t it, Anne?)

The lipsticks shades have names of women who have been inspiring François Nars throughout his career.
It’s pretty funny also to try to imagine the woman behind the name! For me, my guess was that he was inspired by iconic beauties, such as hyper glamorous Hollywood actresses but maybe I’m completely mistaken and he used the name of his best friend or cousin or nanny! Why not?

Regarding the colours, it’s a huge range: 40 shades (but here in Dubai, there are “only” 33) from pink light beige to dark garnet. There clearly is a colour for everyone!
Personally, I would say that this is really the strong point of this range when you compare it to Pure Color Envy lipsticks by Estée Lauder for example, because the choice, even if it’s important, is much more traditional in terms of shades. (Oops, putting you the link, I realized that Estee Lauder had launched new colours) (Sorry, but I gotta run to Sephora!)

When you’re wearing a Audacious Lipstick, it feels very light on the lips but beware, they are not non-transfer lipsticks!
The formula contains lipid microspheres for a 3D effect (to make your lips appear fuller) and extracts of portucala and tamanu oil to moisturize the lips (don’t ask me what it is, I have no idea) and finally brightening extracts of white mushroom.

However, I must admit that I have somewhat mixed feelings about the formula. In fact, about the 3 colors that I bought (Annabella, Audrey and Vera) (photos later in the article), they don’t feel the same on my lips.
Annabella for example is super creamy, comfortable, and moisturizing. It’s easy to apply and does not move for 6 hours on my lips.
Audrey is also very creamy but I wore it one day when my lips were drier than the usual, and they bled slightly in my dehydration lines. Lip liner seems mandatory with this one.
And finally Vera is not the most comfortable to wear. It’s a little bit drying and clearly, this is not the one I would choose the day I have dry lips.

I know, it’s a bit strange that there are discrepancies from one lipstick to another, I don’t really understand how it’s possible knowing it’s supposed to be the same formula for all… Maybe it’s down to the pigments? I don’t know.

The packaging is a black metallic case, matte and without this damn dust catcher rubber material that is usually found in NARS’s packagings. It’s very heavy (= luxury feeling) and it has a magnetic closure (magnetic!!!)(so cool)(I know, I’m obsessed with magnetic closures).
Finally, the brand name is sculpted in the bullet of the lipstick, very chic!

- Huge range of colours (30 to 40 depending on the country you live in)
- Very nice packaging: black, weighted, very high-end and sleek. It's metallic and matte with a magnetic closure
- If you don't have fine lips, you can apply it right from the bullet, the bullet is quite precise
- Crazy pigmentation
- Some formulas feel very moisturizing and creamy
- Perfect coverage, in one stroke
- Very long-lasting (5 hours without moving on my lips)

- Can be drying (with some formulas)
- Can highlight the dry patches on your lips (it's better to scrub your lips first if they're dry)
- It's better to use a lip crayon first, because it can smudge sometimes
- On fine lips, I recommend using a lip crayon as it's quite difficult to apply directly from the bullet; so it's a little bit high maintenance
- No scent, but it's always the case with NARS, so nothing surprising

Focus on Annabella, Audrey and Vera: 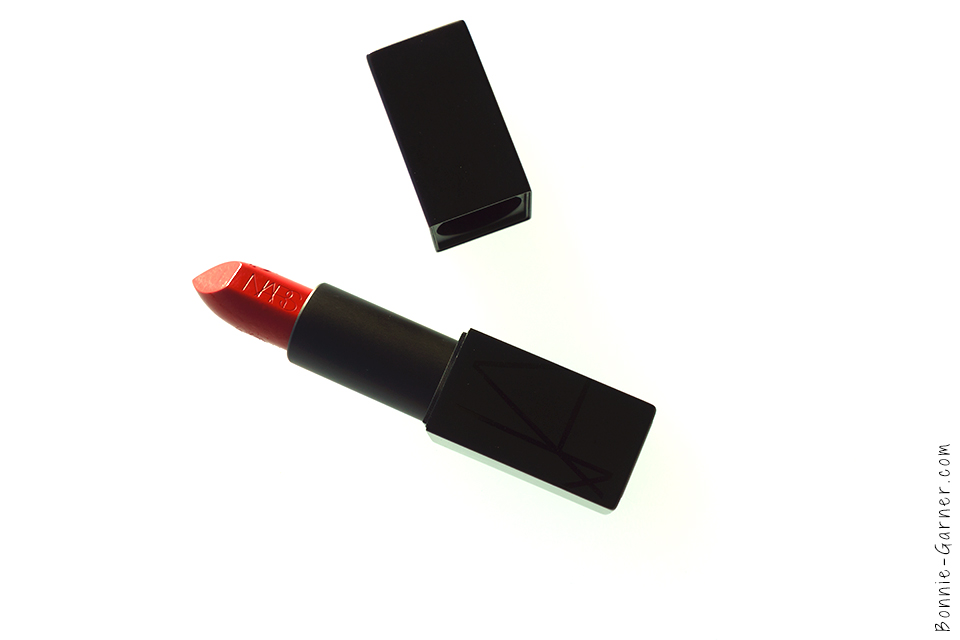 NARS describes Annabella as “red poppy” on its website and it’s quite right. It’s an almost fluorescent warm red, absolutely beautiful and which really brightens up the entire face. It’s just  sublime.
I think it deserves to be the star of the makeup: when you wear this kind of lipstick, you need to allow it to rise and go easy on the eye makeup.

My guess for the name of the lipstick: I thought of a French actress who made a career in Hollywood in the  1930-40’s, Annabella (actually her name was Suzette Georges Charpentier) (yep, not exactly the same). 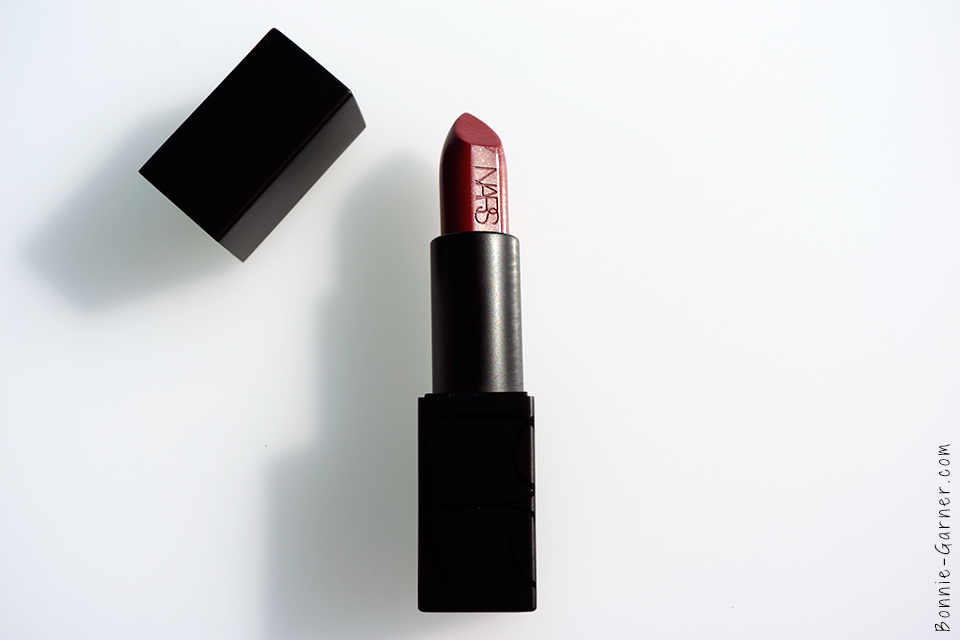 I hesitated a lot between Audrey and Vera, which look quite similar in my pictures. In the end, I could not choose and I went for both!
I don’t regret it because I think the colors are beautiful and very different. (OK, maybe not ‘very’ different but you know what I mean)

For NARS, Audrey is “red currant” which left me quite puzzled, I confess. For me it is a plum-beige. (Umm, excuse me, what?) So err, well, it’s a light plum slightly “muted” with beigy undertones, but not too pink. A kind of plumy-nude. (OK, it’s getting worse!) Last try to describe the shade: I would say it’s an ‘easy to wear’ plum. Not too dark, not too red.
Actually, it really reminds me of the new Pantone 2015 colour of the year: Marsala. I have a feeling that we will see these kind of muted browny-plum very 90s shades everywhere soon! And I’m so glad, it’s a lovely shade!

My 2 cents about the name of the lipstick: well, Audrey Hepburn is pretty clear here, don’t you think? (but maybe it’s Audrey Nars, François Nars’s cousin)(don’t Google her, I just invented her!) 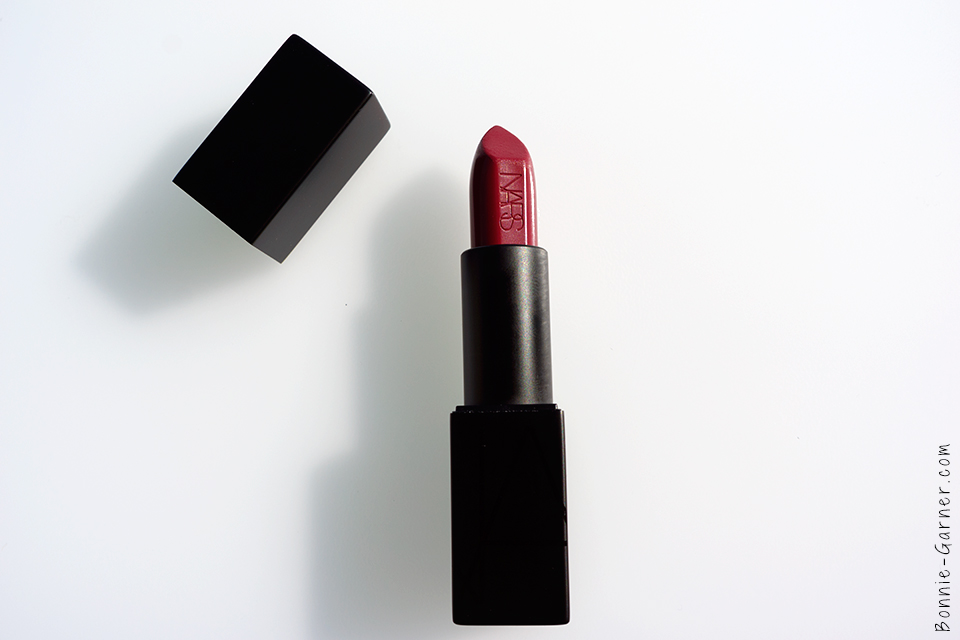 For NARS, Vera is a “bright Raspberry” and I think it’s the perfect way to describe this shade. I’d rather talk about dark raspberry, but hey, that’s quibbling.
This is the kind of color I love to wear in the winter, I think it gives life to your face, because I often look a little bit washed up in this time of year.

And for the woman who inspired the name of this lipstick, I thought of Vera Miles, an actress who has played in Alfred Hitchcock’s masterpiece movie, Psycho … (no, it wasn’t the lady who was stabbed in the famous shower scene, but her sister in the movie)

Finally, here are the swatches: 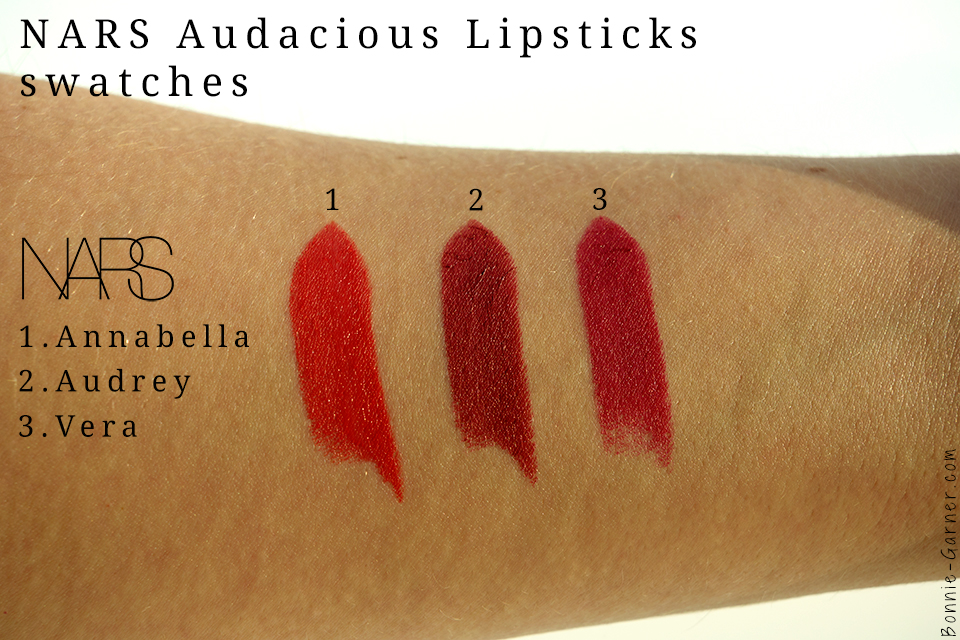 (the swatches were done in a single stroke, I swear!)(look at that pigmentation!) 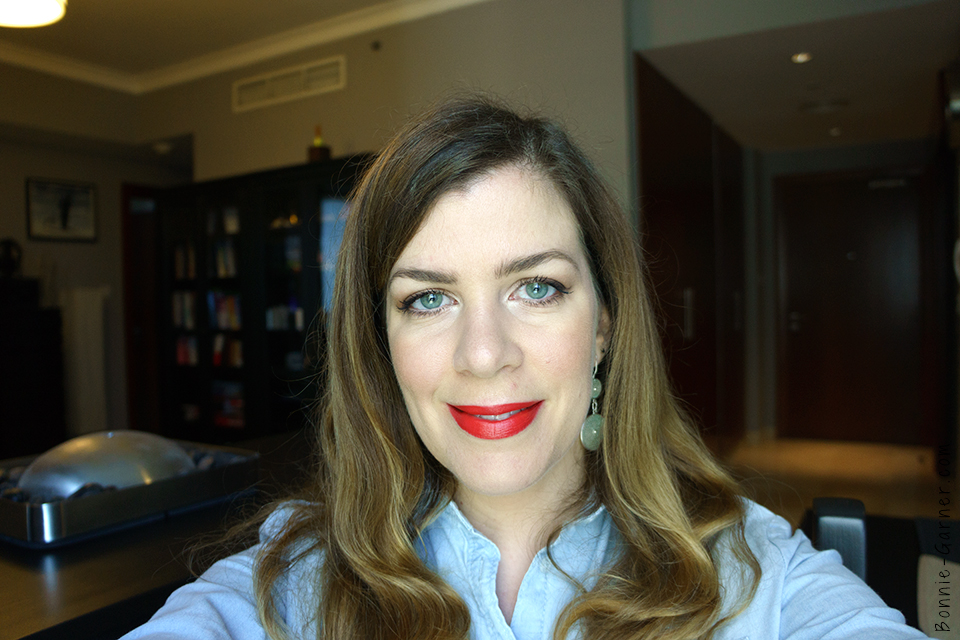 (I had slept only 4 hours when I took this photo but the lipstick is so bright that it illuminates the entire face and it almost erases my very red eyes!) 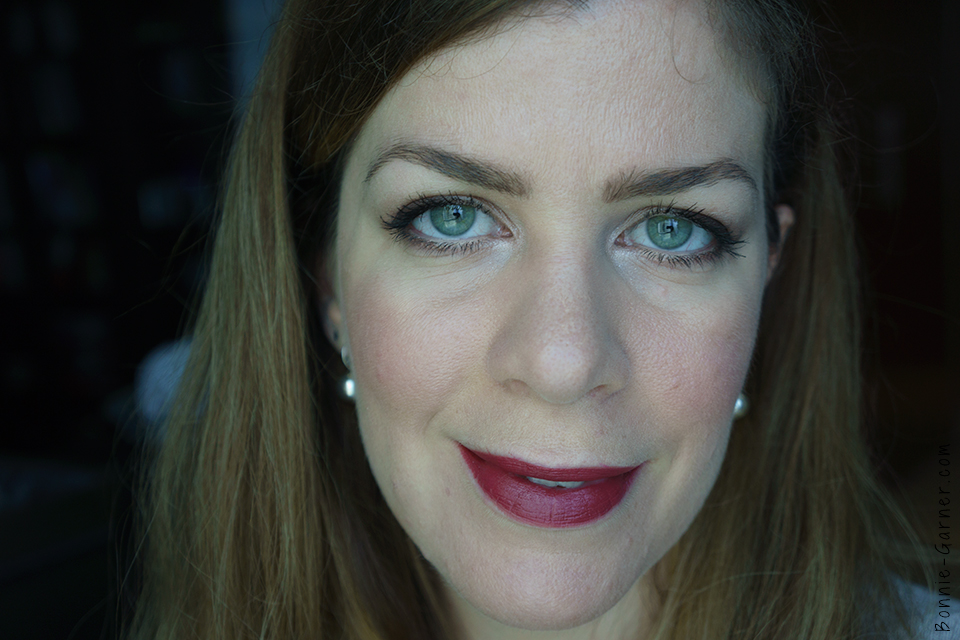 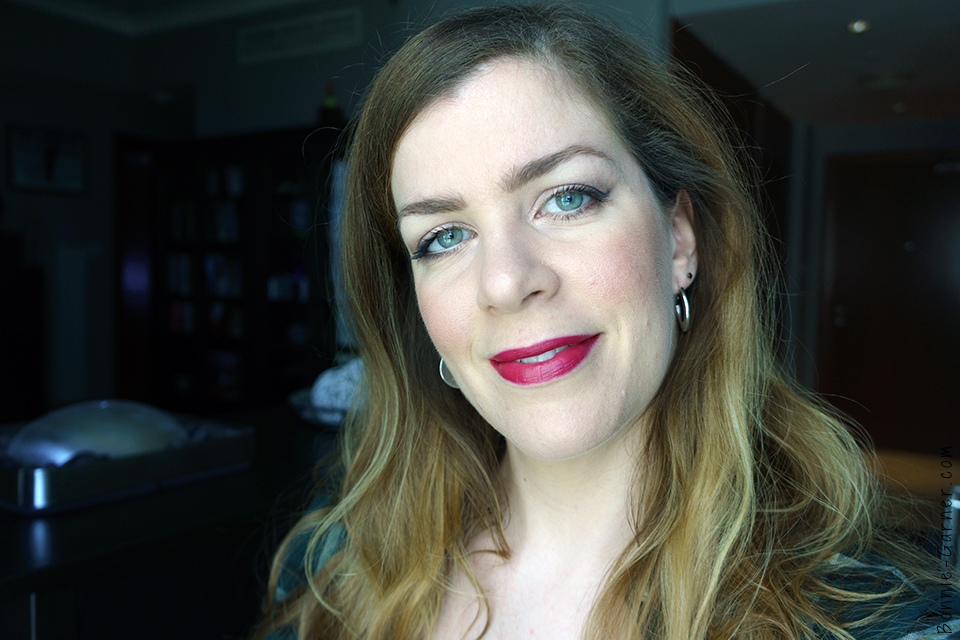 NARS Audacious Lipsticks are available on NARS website for £32.

And you, are you tempted by these NARS Audacious Lipsticks? If you have already bought some, which one(s)?